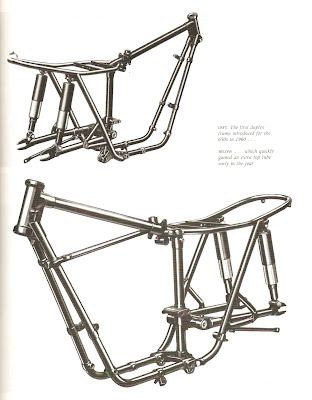 A discussion came up with a fellow Triumph builder after my 1960 TR7 post about model numbers and frame types, making me think I should provide a little info on the Duplex frames. The very first 1960 frames like the frame in the top picture did not have a lower back bone reinforcement tube. These frames almost immediately resulted in a nightmare of warranty failures because of cracking at the neck area. Triumph quickly modified the frames by adding the lower tube early in 1960 so not all 1960 models came with this weak frame. I bought a early 1960 Bonneville some years ago that had the original frame without the support tube and it was in horrible shape with the neck area covered in patches and welds over welds. Triumph offered a replacement front frame section through warranty that had an X stamped on the neck area. I found one of these to replace my early '60 frame. If you have a early 1960 Triumph 650 that does not have its original frame this problem is probably the reason why. If you have an original early 1960 frame in good unmessed with condition and are building a rider I would sell it to one of those fanatic for correctness restorers and get yourself a frame that won't break in half while your riding it!
Posted by Show and Go Cycle Shop at 1:13 PM