These first two ads date from 1955. For Triumph motorcycle's Joe Hunt mostly supplied the Fairbanks Morse type of magneto which is still made today, but from a billet aluminium body instead of the old cast type. Find here. There was an earlier style (pictured below) that dates from the early 1950's or possibly late 40's. I used to have one of this type but it did not have the Joe Hunt plates and cover. The pick up lead connectors appear to be BTH parts. 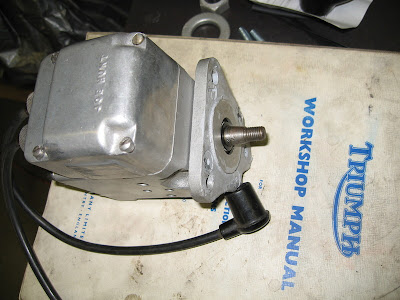 One major problem as far as using these magneto's on Triumph's is the carburettor clearance on the pre-unit's and having them hanging out in the wind on the unit construction 650's where they can break off as well as no advance mechanism for the unit engines. It took quite a bit of fussing with spacers and such to get things to clear on my chopper that has a vintage cast body Joe Hunt mag and dual Monobloc carbs, but it has worked well so far after being rebuilt by Hunt Mags. I know that some of the Drag Bike Racers back in the day preferred the BTH or the Lucas Competition type of mag including Sonny Routt that used to slot the magneto flange mounting holes on K2FC Competition Lucas mags so that the timing could be adjusted slightly without taking the whole thing off and starting over. In my opinion it would be preferable to use the original magneto on the pre-unit's as the cost of rebuild is comparable to the cost of having a Hunt type rebuilt and cheaper than buying a new one as well as avoiding some of the fitment problems. On unit construction engines the benefits of a self contained ignition system that does not need and alternator or battery and no wiring to go amiss the advantages of the Hunt mag are obvious. 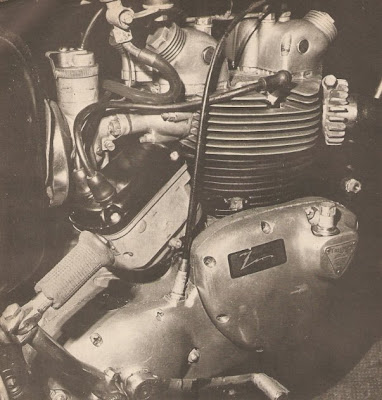 Looks to have a Joe Hunt label just visable behind the kicker. A cool and rarely seen setup that probably worked a lot better than the original distributer. No room for a second carb though.
Posted by Show and Go Cycle Shop at 8:29 AM