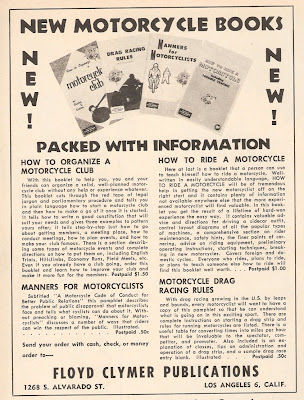 From the early 1950's through the late 60's there was no motorcycle drag racing sanctioning body. The AMA did not want to get involved in the sport and the NHRA did not publish some motorcycle drag racing rules until the mid 1960's. We did not get an organised sanction until 1968 with the AMDRA. The only 1950's era motorcycle drag racing publication I've ever seen published was Floyd Clymer's Motorcycle Drag Racing Rules book as seen in this 1958 advertisement. I would very much like to find this book if anyone can help.
Posted by Show and Go Cycle Shop at 8:49 AM