The Next Ride & The Path to Get There 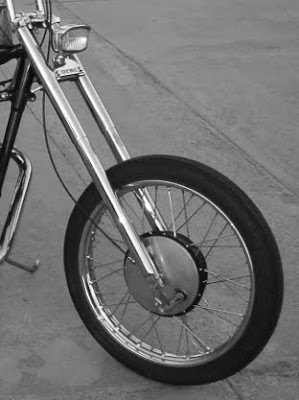 On my last chopper build I used extended lower legs made back in the early 1970's. I have not been able to find much information on these, but know of two shops that may have made them. One was called Barney's and the other is Woody's out of Santa Cruz, CA. In the January 1971 issue of Custom Chopper they do a story on The Fiberglass Works, and there are a few custom bikes featured in this issue from the Santa Cruz area sporting these custom sliders made at Woody's Custom. The neat thing about them is that you sent in your stock sliders and they used the bottoms to make new ones to the length desired. That way everything bolted up when you got them back. There was also some extremely heavy, solid steel spacers that went into the bottom, so that the same amount of fork oil would be used and if internal dampning rods were used they would bolt right to these spacers. I had solid alloy spacers machined for mine to reduce weight and set the length were I wanted it. 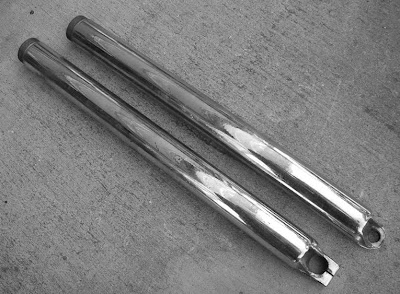 Like most all custom front end components from this period most of these sliders were LONG! The bikes featured in the Custom Chopper articles were all extended like 12". The set I used on my last chopper were only 6" over and I ran them two inches higher so the fork seal holders would be hidden and to reduce the extension to only 4". Another cool thing about these sliders is that they have a larger outside diameter than stock sliders so they fill up MCM type fork covers better, giving that one piece, seamless look that is so damn nice looking. The set above is one of two other sets I have. Both found at swap meets, although I have seen a couple sets go on ebay over the years. 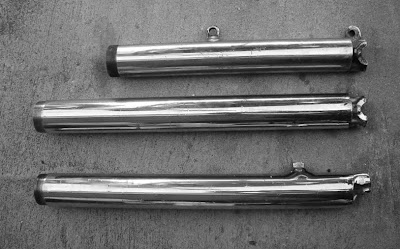 Both the sets I had were about 8" over. I wanted only a slight extension for the next build so decided to have the other sets I have cut down. From previously buying parts from Hal Hall who uses the ID zanewillcameille on ebay and talking to him a few times. I learned that he knew his stuff when it came to the fine details of British sizes and threads, having been a Triumph guy his whole life and building and drag racing Triumph's for decades. He agreed to do the work for me as a favor because he does not usually do small one off projects and his focus is machining aircraft parts as his living. The picture above shows one of the cut down sets next to a stock Triumph pre-unit slider. I had both sets shortened to 4" longer than stock with the intention of running them to be only one or two inches over, with the oil seal holders hidden inside MCM covers. On my next chopper I think I will set them up to be only 1" over stock. With a slightly lowered rigid rear I like to have at least a little extension up front for good looks and leaning clearance when cutting the corners. Please don't bug Hal for little machine projects, but please do have a look at some of the neat parts he makes for Triumph's! To check some of them out click here .
He makes all this stuff in his spare time and does them all in limited runs. Some parts are improved versions of components sold by JoMo and other obsolete parts and some pieces he makes are entirely original. After some of the small production runs, some parts are not made again. I have a few of his special parts that he's discontinued and now they're as rare as vintage parts. My favorite pieces he's made so far are the dual carb manifolds for single carb 650 heads and the alloy engine pre-unit 500's. Both were made to run slightly larger carbs than the original factory pieces and are better parts in my opinion. A bead blasting and hand polishing and this stuff blends right in with the vintage equipment. 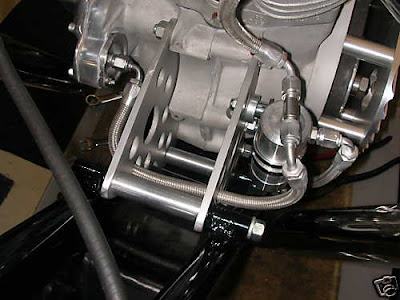 Here his generator block off plate is used for a breather mount on his Land Speed bike. 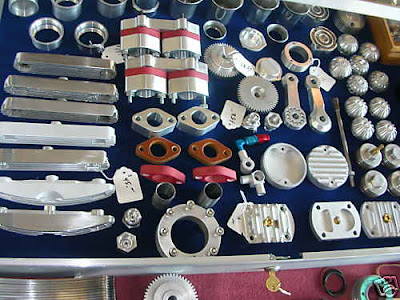 A peek at Hal Hall's display case.
Posted by Show and Go Cycle Shop at 8:38 AM