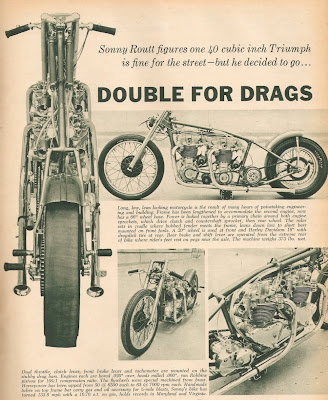 The earliest feature I've seen on Routt's original Double is this story out of a 1962 issue of Car Craft. I'm pretty sure that's a Cadet retreaded slick mounted on a 16" Goodyear tire. 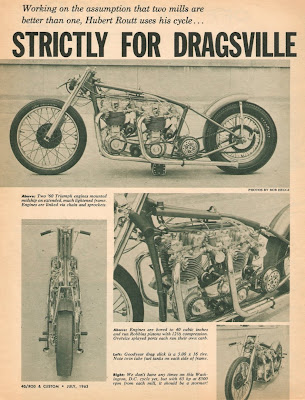 This Rod & Custom feature is from 1963 but is the same photo shoot as the Car Craft story above. This story was tied into a model kit build of the Routt Double. The 20" TR5 wheel is something I'd like to run on a future custom build. 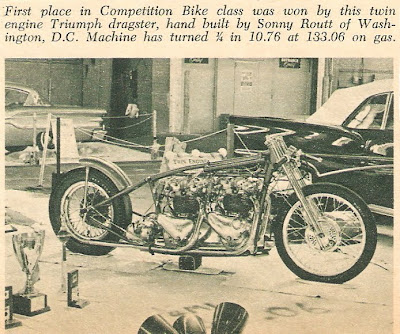 Winning Competition Show-Bike at a 1962 car show. The front wheel hub has been chromed at this point and it has lost it's nifty little trumpet tips on the exhaust. 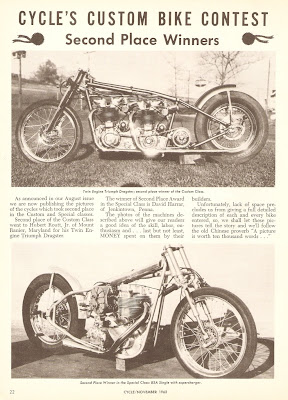 Cycle magazine had a Custom Bike Contest in 1962. I haven't been able to get my hands on the issue where they showed the winners, but here in the second place story is the Routt Double. I have a feature to post on the blown BSA soon. At this point Sonny's Double has a different clutch that I don't recognise and it also has a 16" Inglewood drag slick. Unfortunately the bike's days came to a dramatic end not long after this photo... 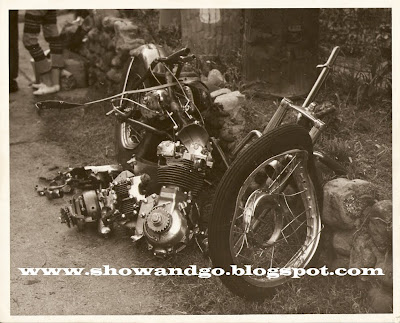 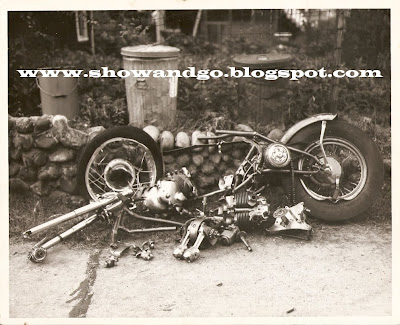 Is there a single part left that has not been destroyed? The complete devastation of this wreck is really amazing. Did the frame let go? Wheel come undone? Engines explode? Looks like all of the above actually. The good part is that Sonny survived. Quite a bit of details can be seen here. What was he running inside those engines? Just take a look. The heads look to be the rare 1958 Cliff Guild modified specials from Tricor (I have one for sale on ebay right now). Sonny was close to Tricor and had access to the special equipment they offered and in the late 1960's supplied his special equipment directly to Triumph in the form of the first factory Triumph 750's. 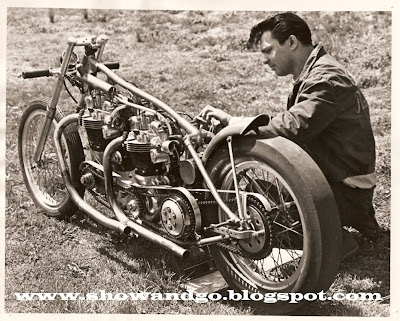 So he built another one. And this double was just as good looking as the first. Lots of little detail changes but the same basic layout and frame design. Now running a 18" Avon drag slick and no front brake. Front brakes were required under most drag racing rules in the late 1960's so this pic probably dates from sometime in the mid 60's. 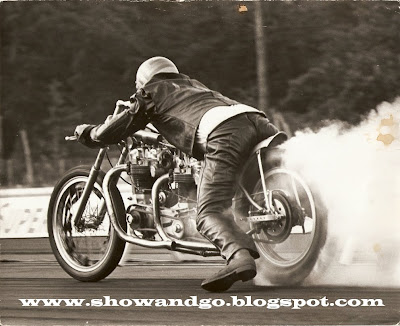 Back to shutting down the big Harley's and anything else that pulled up next to him.
Posted by Show and Go Cycle Shop at 10:09 AM