As I mentioned in the Von Dutch Triumph post previously, David Edwards, the Editor in Chief of Cycle World magazine, has quite a collection of old Britbikes and it seems that they are mostly all customs of some sort. He was nice enough to send me a handful of emails with pics and info on some of his rides. Here is a choice sampling: 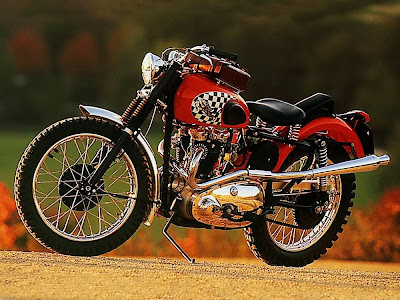 First up we have a 1949 Iron T100 fitted with a 1952 front frame loop that has the air cleaner hose hole in the seat post downtube, and a genuine 1953 era Bill Martin spring frame kit bolted to the rear. This bike was featured in the March 2000 issue of Cycle World and is a really great read if you can find a copy. There is also a big story on Fonzie's Triumph TR5 in this issue and between the two features on these bikes it's well worth the search. It's thanks to Davids story on this Martin framed Triumph that I learned about these aftermarket swingarm frames and was able to find two examples since then with one being a complete bike originally customized in 1953. Sometime in the future I hope to do a big post on the Bill Martin frames. Imagine taking apart a factory rigid frame to install a swingarm? I don't think that would be a very popular idea these days. This project started as another old beat up and neglected sled with seized cylinders etc. It was built up and brought back to life by non other than Mike Parti. A really well done early competition custom ready for street or trail. 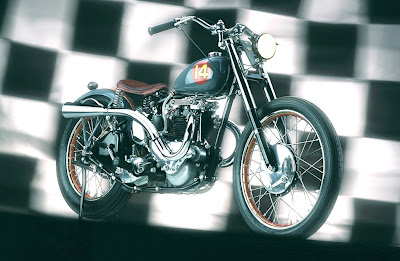 Next up is Number 14, another Iron 500 Pre-unit but this mill is squeezed into a little light weight 350 3T rigid frame. I believe this custom combo was originaly put together way back in the day, like the 1950's or earlier. I have a before pic somewhere buried in the files showing this bike very close to how it looks now as far as the basic parts go, but it was decided that a face lift was in order and Wes White was given the task. Quite a tidy build with a real nice combination of extremely hard to find parts and cool details.

This mind blowing 1956 BSA A10 chopper was a good old ebay score, the story was told in one of David's editorials that I have misplaced, but I'm sure it sold for less than it should have like most of these insanely cool survivors do. The great profile shot is by Tom Zimberoff and the bike was originally chopped by Ron “Crank” Hall in the early Seventies. David's been trying to track down Mr. Hall with no luck, so if any of you guys know his whereabouts speak up. I know I've seen this bike featured in either Street Chopper or Custom Chopper magazine from the early 1970's. The lines he created with this custom chopper flow so perfectly with the balance of wild paint, molding and chrome. There are so many things that are right on this long bike. The short hardtail (looks to be a 2" stretch or less), molded in fender hugging a 18" rear wheel with Hallcraft hub and Kosman / Airheart disc brake, long ass Harman fork with perfect neck rake, molded in gas tank kicked up to just the right height with the handle bars flowing back to the rider, etc etc. This is a bike to ride into oblivion on. 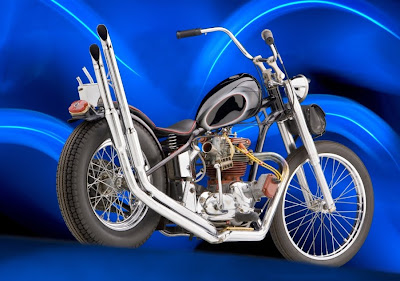 “Flexi-Flyer,” a Finched Triumph chopper was rescued from a shed in the ‘70s/’80s by Detroit toolmaker “Greasy Dave” Fagar and brought back to life. He then took it to Ron Finch for paint and pipes. Lots of cool details on this one like the goosed neck with stock length covered forks and narrowed Triumph gas tank. I really like the lines and overall design of this chopper as well, but David says that right turns can be a little tricky with the pipe to ground clearance. I'd say it's worth it for pipes that bitchin'! 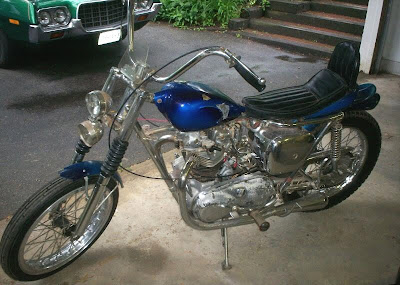 Lastly for this post we have another ebay find. I actually watched this one go a few years ago with disbelief when the bidding ended. It wasn't in the cards for me (I was broke as usual). Thankfully it went to a good home. Davids words: "1958 Triumph Trophy (note duplex frame, chromed) that was customized and apparently won the Mild Custom class at the 1962 Boston World of Wheels Show. Wild rear fender or 3, scoops molded into sides of gas tank, front fender has hidden radio antenna that extends forward! Very Schwinn Stingray. Got it for $2500, and I was the only bidder! Needed a new clutch and a few parts to get back on the road but the engine runs great. Also added a front brake. Chasing a fuel line leak (chromed, solidly mounted metal fuel lines not a good idea for a rider). Trying to chase down history/builder but no luck so far." Unbelievable. I could go on a full blown rant about the irreplaceable value of a bike like this compared to the modern bolt together bobbers that go for three to four times that much money but I shall refrain. This survivor is such a rare jewel of early 1960's show-bike goodness. Once hacked into a bike like this is gone forever, or? My first thought with this bike was that it was such a perfect time capsule that it shouldn't be messed with at all, and I was bold enough to tell Mr. Edwards so. But after letting this picture talk to me and seeing Fritz work his magic on the Glittercycle/Megacycle, I'm thinking this old girl could be brought back to its former show winning glory without losing anything as long at it was a matter of refreshing plating, paint and polishing with no alterations. It would look so nice parked next to the restored Dutch Triumph! I'm not sorry for being a purist in a motorcycle scene that's usually about doing whatever you want. Read the comment I left on the Show-Bikes post for the short and sweet explanation. This is by no means his entire collection of rides, but these bikes fit the era this blog is covering now the best. My thanks to David Edwards for the above pictures and information.
Posted by Show and Go Cycle Shop at 6:22 PM