Found another neat quote from Borris Murray on Dragbike.com that I thought would go good with this photo of Rich Richards riding Pam Too. 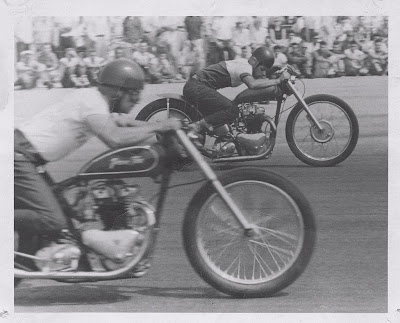 "Don McAvoy was also one that was out every weekend, racing Rich Richards and his "lil Pam" at Colton and the "Dale". It was always nip&tuck 'tween the two. They are the two that got me hooked on racing my Triumph. It didn't take me very long to get up to their speeds. Eventually I got ahead of both, which earned me the trip to England in the first "Drag Safari" from the States. Perry & Scotts' double and Dick Rios' "Two-Timer" were also there,..got a lot of attention,. as soon as I got home I built my first Double. Put em both away the first summer in match-races. I was proud to be the victor, but sorry they 'hung it up' after that. They both had super neat bikes, but couldn't turn 160, and quit trying! I'm sorry 'bout that. Don McAvoy also built a double Triumph, - McAvoy was the man that taught me all I knew back then about using nitro, with benzol yet. We finally heard about P.O. ~ Boy, did things change ! I even tried hydrozine before that,-- a big mistake ! Don even tried mixing black gun-powder with his nitro,.. didn't work.-- During those early days Rich was the man to beat, on his "Lil Pam" Triumph. God Bless him. One time I rode Dons' Triumph at Santa Ana, there were no E.T. lights, just MPH. On a single run Don told me to slowly cross over into the other lane at half-track and go thru' the traps in the other lane. This gave more footage for the 1320 quarter, I went a few MPH faster of course,. a longer quarter ! Don would show Richie his time slips, gee!- musta been the lower altitude, huh ? One was always trying to out-do the other. ~ Of course, that's drag-racing!"