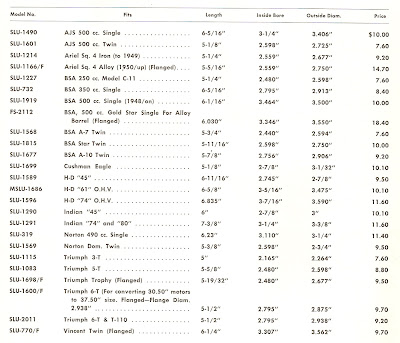 A few years back I was talking to lifelong Triumph Drag Bike racer K.C. Spillers over the phone from CA to his hometown in the state of Indiana and he mentioned that his brother had bored out a 1957 Triumph alloy 500 to 650cc's in the late 1950's. The thought was intriguing but no further info was offered except that the late 1950's 500 pre-unit motors are nearly identical to the 650's with the same crankshafts / main bearings, rods and camshafts. If you could fit 650 pistons in those beautiful alloy jugs everything else was pretty well matched up so it seemed possible? Then I got my hands on an old late 1950's Beck Motorcycle Parts and Accessories catalog and laid eyes on the Wellworthy Cylinder Liner listing. Take a look at part # SLU-1600/F. There it is in all its glory. The Triumph pre-unit 500 big bore kit. I wonder how many of these cheated their way onto the track? Could they be used to cheat today? I need a alloy 500 cylinder at max overbore to put up for sacrifice to this forgotten speed trick. This is the type of thing that will keep a guy awake at night. Looks like theses sleeves were not thick enough for even one over bore so it is a one shot deal. I'm sure it would be kinda pricey with all costs considered and then you have to get it right the first time. STD. to .040" over bore cylinders are not good candidates strictly for the sake of not ruining good parts. I contacted a sleeve supplier in the UK - http://www.westwoodtrading.co.uk/ - that had some NOS Wellworthy cylinder sleeves and they replied that they did not have any of the SLU-1600/F sleeves but they could make them. If any one wants to order some count me in. 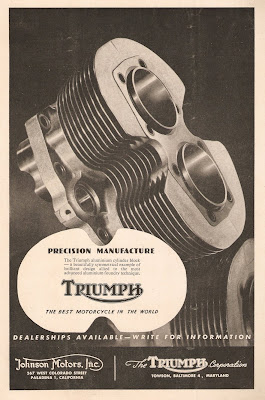