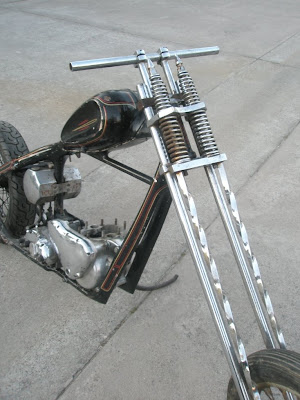 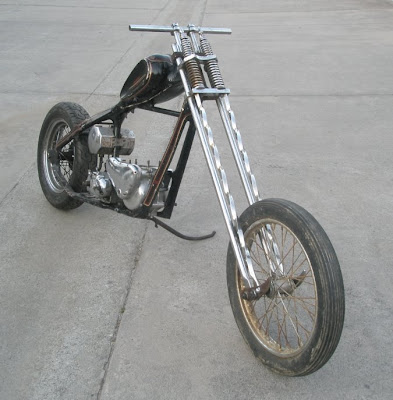 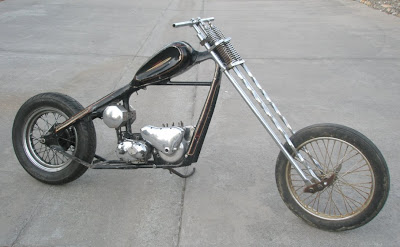 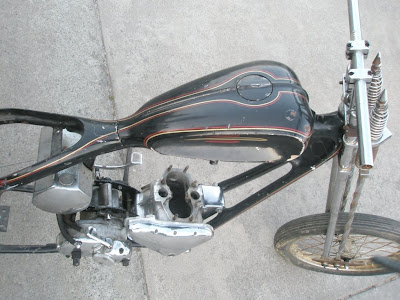 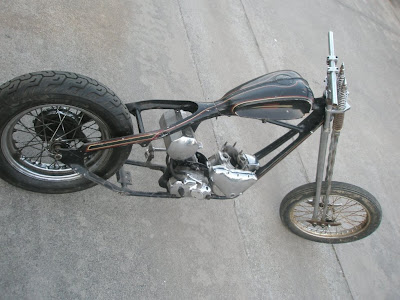 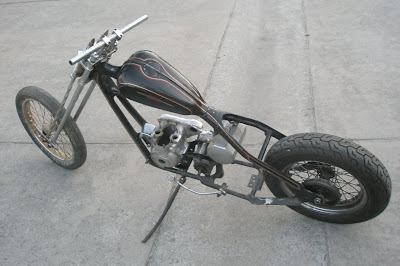 I spent Father's Day in the Garage and this is the result. A dream to some and a nightmare to others, I keep going back and forth on whether to sell it or build it as my next chopper. When you sit in it, arms reaching straight forward to the narrow broomstick bars, you can feel the potential power it has to blow minds and confound the straight citizens. The springer and front wheel are a matched set with the wheel having a very nicely done arrangement of built in spacers coming out of the spool hub. The front rim is a skinny British 19 incher. The Springer is the type with Harley style rocker bushings and spring rods that are replaceable (and ready to be replaced). I believe the springs, rods and bushings are all Harley parts making for easy parts sourcing. The forks are 14" over and the frame is raked a bit but not enough to ruin things by making the frame level. The frame is up in the air in the front as it should be on a chopper of this type, with the open area underneath just needing a set of TT pipes to fill the void. The rake and extension actually feel good from a handling standpoint as it does not have the heavy side to side flop that some long chops from the 70's have. The kickstand has a raised boss on the side that has CUSTOM CYCLE DELIGHT stamped in it. The kickstand fits this bike like a glove and is testament that things are as they should be. The frame has the best molding and paneling job I have ever seen on a Triumph or any other chopper. I believe it spent the early years of its life in a shop window or someones living room as it was never actually put together after the unreal bondo work was completed. The proof is that they molded over the lower gearbox pivot bolt holes! There are no cracks or parts where the molding is coming loose, but there are nicks and chips from it being moved around over the years. As you can see the tank is molded to the frame with a hairline separation making the tank removable. The bolts for the tank are a little tweaked and there will be small amounts of detailing needed here and there. The rear axle plates of the frame are the long type that can be slotted to shorten the rear frame by a couple inches if you wanted. The oil tank is one of the hard to find narrow octagon's with rounded ends. The engine cases are 1961 TR6R that have been polished and look to be mechanically sound. The gearbox is complete, but the internal condition is unknown. The rear wheel hub is the early pre-unit type and is in good condition, but does not have the brake components and the drum has grooves. I will not part it out and am not desperate to sell it. Right now it's available for about what I have into it which I figure to be $1000. The thought of taking it back apart and boxing everthing for shipping is not very appealing to me so pick up would be best or some kind of trucking arrangement. If you can dig it send me a email. I'll probably give it a go on ebay in a week if no one grabs it.
I also have a Twisted stock sissy bar that came with the springer, some NOS Colony Pike axle nuts and a NOS Avon 2.75 X 19 Speedmaster tire available at a small extra cost.
Posted by Show and Go Cycle Shop at 9:12 PM