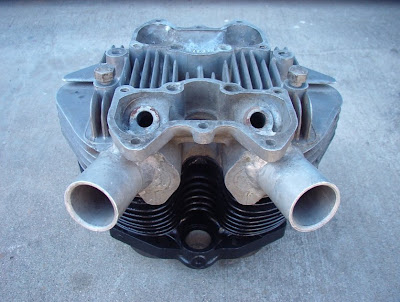 Here's an interesting example from my collection. I believe it to be a 1957 Cliff Guild special from TriCor. As explained in this quote from the Triumph Racing Motorcycles in America book "The twin carb Delta head caused a sensation in the U.S. when it first appeared in 1957 as a dealer retrofit for 500cc models only. Through its dealers, TriCor offered a specially modified version of the splayed-port head featuring oversize (1.5 inch) inlet valves and welded on intake stubs. TriCor's chief tuner, Cliff Guild, disliked the threaded in inlet spigots and lock nuts of the standard Delta head. He also wanted longer inlet tracts and a wider angle between the carbs. So he sent batches of stock heads to a Baltimore area welder who attatched the lighter and more trouble free alloy stubs. The heads then when back to Guild for porting and polishing".
That in itself would make this a very rare peice but there is more. This head has had the combustion chambers opened up around the outside edge for use on 650cc cylinders and the intake tracts have been ported to 1-1/4", a popular size for 650 race bikes using the spigot mount AMAL GP carburetors. The head bolt pattern is the same on pre-unit 500 and 650 engines so no modification was needed there. The exhaust pipe spigot size is 1-1/2" and some T100 Race Kit 1-1/2" exhaust pipes would work very well with 650cc's. Seems like this would have been an early modification as the Delta Dual-Carb head was offered purpose built for the 650's in 1958 with the correct size combustion chambers and exhaust ports for 650 cc.
What makes it really interesting is that I have two of these cylinder heads that have been modified exactly the same and they came from completely different parts of the Country. I would love to know the story behind these. Any one that has any information or opinions please comment below or email. 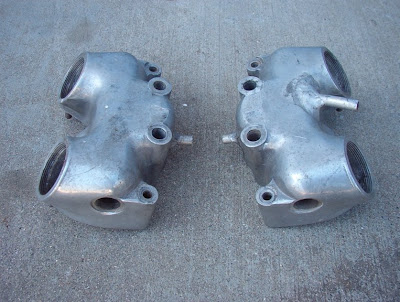 A neat set of breather tubes added to the rocker boxes that came with one of the 1957 Delta Dual-Carb cylinder heads. 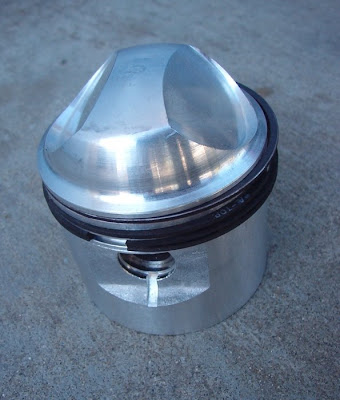 Here is a 650cc Power Max piston that I used to test combustion chamber fitment. 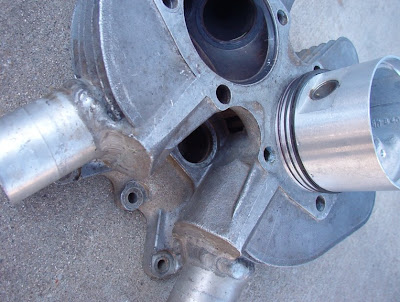 You can see the taper on the outside of the combustion chamber where there originally was the flange relief for the 500 cylinders. The powermax piston fits inside, but a clay test needs to be done with the engine assembled to see what's really going on. The piston does look to match around the outside, possibly giving a good squish band?

Imagine this head on top of a 650 sleeved, close pitch fin, alloy cylinder as described in the previous post. That would be WILD!