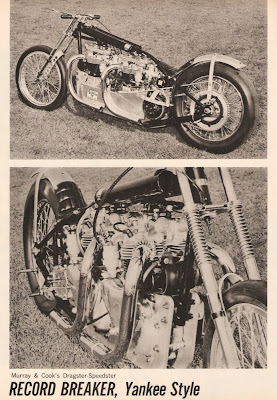 I NEED A GOOD SET OF THESE EARLY TRIUMPH TERRIER / CUB FORKS FOR MY HAGON DRAGBIKE PROJECT. PLEASE HELP! 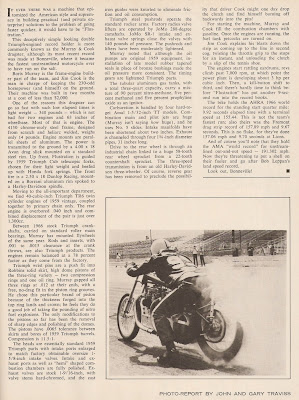 This is a somewhat early version of the bike when it was still running stock triumph 650 cylinders. This drag bike was one of the fastest in the world all the way up to the early 1970's.

Here's a neat email I got last month concerning Boris and Flustration after I posted some Boris Murray quotes:

"Hello gentlemen,
A pal of mine in Melbourne Australia, sent me the article of yours regarding twin Triumph motors bikes. I met Boris Murray and Don Cook in the late '60s. I am a retired sign painter, muralist and billboard painter who traveled with a Romany kumpania for 37 years. A kumpania is a traveling Gypsy tribe by way of explanation. My pal and I are both Gypsies and former riders of bikes.
When I met Boris, I was in the town of Pomona, CA where I was born. I was returning to visit old friends and kin. It was in the local Harley Davidson shop that I met Boris. He had a friend there, the friend said I was a sign man and Boris then asked me to stop by the Murray and Cook shop to letter a drag bike. I had a small lettering kit in my Harley's saddle bag, so followed Boris to his shop. The bike in question was a twin engined stretched out machine with two Triumph engines. The gas tank was within the black painted frame. I put orange gold letters on the top tubular frame piece that said, Flustration. I couldn't charge much as it was a small job and not much area to paint on.
Later on, I believe it was Don Cook who rode it in the Pomona Drags. I can't remember now, but I think the time was something like 8:14 seconds and 164+ mph. I may be wrong here, but that seems right to me. Boris rode the bike at Bonneville Salt Flats, it could have been Muroc Dry Lake (?) and reached a top speed of, I believe, 212 mph with the open frame. I think they added a small fuel tank of sorts. The wind tore off the leather edging of Boris' helmet, ripped edging from his goggles and loosened one lens,ripped the top off his gloves and tore his jacket stitches. He only had the palms of his gloves and as the wind was up, no return run. I saw Boris afterward and asked him how he held on. He grinned and said, "Pretty damned tight!"

Have a good day, nice article too."
Lucky,
Baxtalo Juki, (Lucky Dogs in our tongue)
Posted by Show and Go Cycle Shop at 9:28 AM