Brownie from Austrailia sent in a note of thanks and this lovely story of his annual club race. I'm jealous. I wish my club could get together something like it, but finding a place where the Man wouldn't ruin it is the problem these days. Anyway, what a great club name, patch design, and club history. Thanks Brownie!

"I was a member of a club called the 'Huns' for 22 years, they've been going since '67in Melbourne, we used to have a race called the 'Hardly Ferocious' at our annual run around a huge granite rock called 'Eagle Rock', the track is about a mile or so around. The rules of the race are, you have to ride your best bike not under 650cc, no knobbies, no cheating (OK!) 13 laps, 13 stubbies. We start at the top and start sculling when the canon fires a round, do a lap, all the rest are drank in the pits after that, must switch bike off, get a beer and chug it down, start bike, do another lap, 13 times, if you wanna win , hold it up till your beer is empty and ride like f+ck around a slippery, dusty track and stay upright when you're pissed outta your head, easy!...Oh nearly forgot, there's a lot of spewin' going on too! I've won this race 4 times, 3 of them on the trumpet which I've owned 27 years now, best time was 28 minutes. There were video's over the years which are good, the stills just don't do the race justice but hey man, you get the picture.
Taken in '87 or '88." 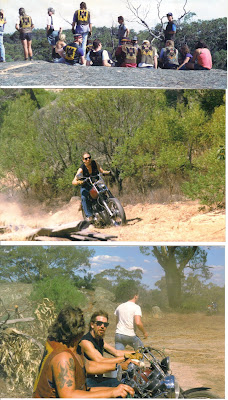 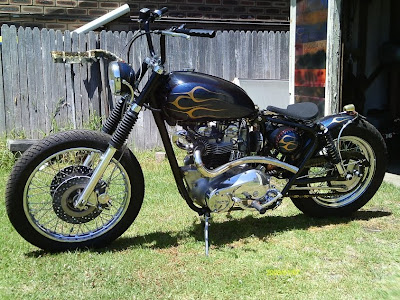 His sickle, owned for 27 years and seen in the race pics. Looking great after a recent rebuild and ready to provide some more good times...
Posted by Show and Go Cycle Shop at 8:57 AM