"Call it a custom time capsule. It's a Triumph Bonneville bought new in 1970 at Shores Motorcycles in Warren, Michigan ($1470.50 + $25 for stainless-steel fenders). The proud new owner soon took his bike to Kustoms Unlimited in nearby New Haven for a mild customization. Note the extra chrome (even the rear brakelight switch!), the shorty mufflers, the flamed lacquer paint job--though, strangely, a stock seat. Then for some unknown reason it was parked in 1974 showing 8000 miles, and not ridden again 'til 2008 when the second owner purchased it."

"I saw it at the Mid-America Las Vegas auction last January. Only two or three of us bid on it and the competition soon dropped out, so I got it for just $4500. It started on the second kick, and needed just a tune-up and new fork tubes (thanks to Tim at Century Cycles in San Pedro) to be fully road-worthy. A couple of months later, over at Bill Getty's, while replacing that little top-hat-looking bung in the primary to stop an oil leak, we also installed new clutch plates. The seat padding is crumbling so I'll replace that--and maybe add a tuck & roll or button-tufted cover while I'm at it. Otherwise, it'll be kept just like it was when parked 35 years ago." 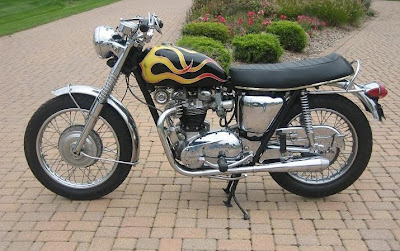 A custom seat cover would be the perfect final touch to this simple custom survivor. So close to stock, but not. I'm digging the reverse cone mufflers. The last year of the single downtube frame bonneville with all the right stuff and ready to ride...
Posted by Show and Go Cycle Shop at 10:38 AM