So you have a Triumph project with a stock frame, but you want it to sit lower and you'd like the bike to be a bit longer for riding comfort, better high speed handling and looks, so you get on ebay and start bidding away on old beat up bolt on hard tails, STOP! It's been done to death my friends. There is enough bolt on hardtailed Triumph's out there already. If you ride them hard enough they break. The long ones flex and handle like shit. Most of them were not straight from the beginning and if they were built right they've been f.u'ed during their lifetime one way or another. No matter what anyone wants to think, bolting on a hardtail to a unit 650 does not make a bobber. If that's what you really want a pre-unit rigid is the way to go. OK, I admit it, I built plenty of the bolt on's in my early bike building days too, and I still have a soft spot for the bolt on rigid unit construction 500's (must be the flat track history), but someone needs to stand up to the "Bobber Revolution" before all the old swing armed Triumph's are gone! Now that I've upset a substantial portion of my readers, please read on... 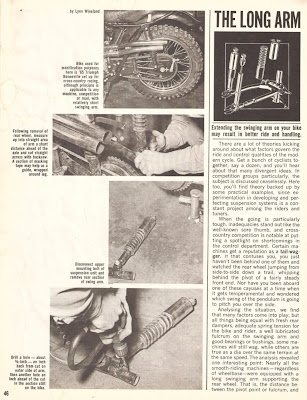 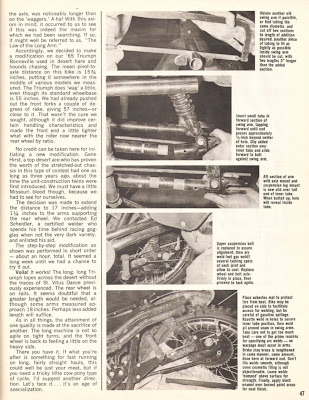 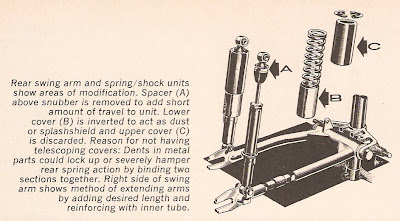 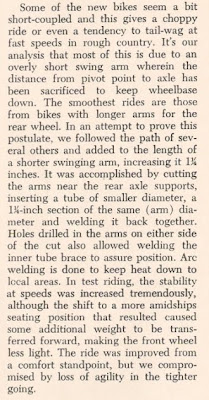 Both of these articles have you machining more than you need to. I use two swing arms by cutting one to add the length desired and then only two inner sleeves are needed and only one welded joint to smooth out. These were done to desert sleds originally so cosmetics were not a priority. For the custom street or strip bike the welds are smoothed out and taking the swingarm completely out of the frame and welding it up on a flat table with a axle installed and the correct spacing between axle plates is recommended. Finding a extra swing arm should be quite easy with all the frames that have been hacked of late. 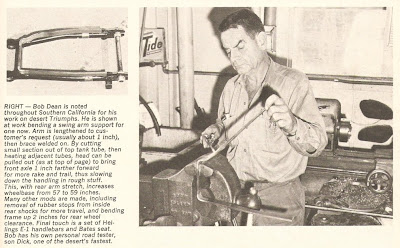 To eliminate flex here is the basic plan, although it could be done a lot nicer for custom bikes.
1967 Motorcycle Sport Book 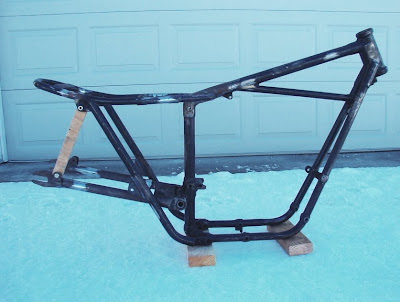 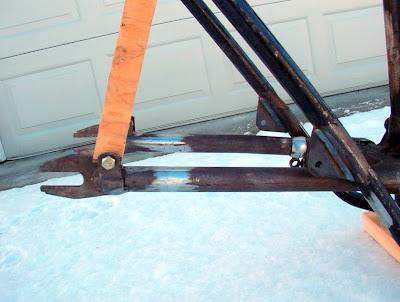 Here is one that I did using two swingarms with a light press sleeve inside. I opted for the 1 1/4" extension for a subtle effect that will lower the bike and extend the wheelbase just slightly. Just like everything else you can do with custom bikes, more is not always better. 3" is the most I would go for a radical custom and would stick to 2" or less on a street or strip bike. I've done a bunch of modifications to this '61-'62 duplex frame including shortening and reshaping the seat loop to match a Bates scrambles seat, removing the passenger peg tubes and replacing with small brackets, shaved switch housing lug & gas tank brackets, additional neck gusseting for strength etc. No, I'm not going to use plywood struts. It's getting shrouded Hagon shocks because it's gonna be a street bike! Yes, that's snow at only 1500' above sea level in sunny California.
Posted by Show and Go Cycle Shop at 9:47 AM