The un-named double as Max Kelly built it. Featured in Hot Rod magazine in 1964. The most beautifully engineered Triumph double engine dragbike ever built. Problem was it didn't perform as good as it looked. Sold to the Perry & Scott team sometime around '65-66? 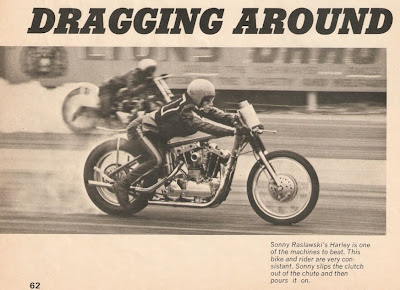 Uh-oh, a Triumph double engine fuelbike getting shut down by a single engine Sportster is not OK. Sonny Raslowski hooks up with just a hint of smoke coming off of his Avon Slick while the Perry and Scott bike is boiling it's Avon away. 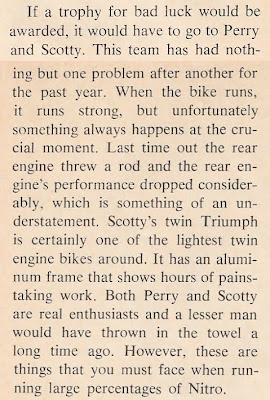 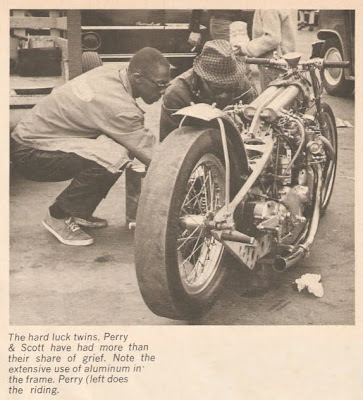 This beast needed more traction than the four inch Avon could provide for sure. The blower was ditched by Scott in favor of four Amal GP's set up for fuel. The forks were also changed to the somewhat common Triumph Terrier forks. 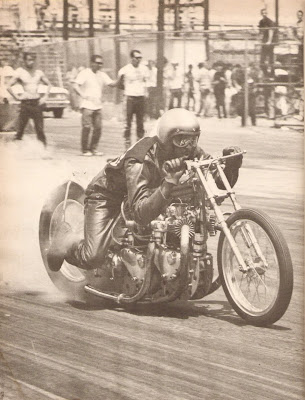 Smoking another one, but looking damn good doing it. This material is from 1967. I think the bike may have been retired in the late '60s. It's such a distinctive bike, I wonder what happened to it. Could it still be stashed in a shed somewhere?
Posted by Show and Go Cycle Shop at 9:13 AM