In early 1967 at the Stardust International Speedway, Las Vegas NV, two Triumph motorcycle drag racing giants came to win. Neither did, but one went away proud... 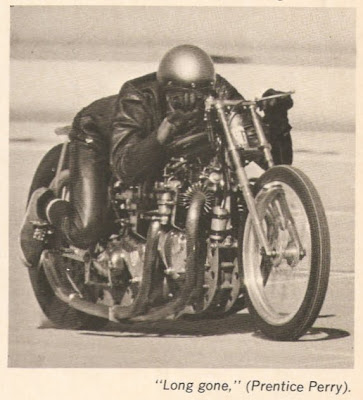 "Competition was very keen and the big run-off's matched Murray & Cook's twin engine Triumph with Harley mounted Leo Payne. Both came out of the hole well, but Payne took the win in e.t. bracket one." Winner of event, Leo's H.D. e.t./speed of 9.98/147. Later: "The crowd came to its feet when Murray & Cook came out on a record run with a sensational 9.63 second e.t. and a top speed of 155.17 MPH." 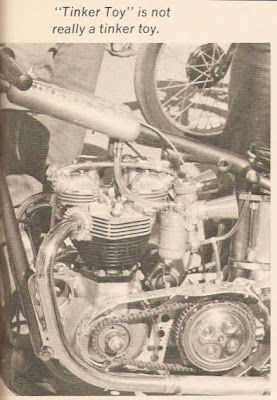 This pic is from the same Las Vegas event. I talked to a guy a few years ago that was in possession of "Tinker Toy". I'm pretty sure he was out of SoCal. Anyone know him???
1967 Cycle Guide
Posted by Show and Go Cycle Shop at 9:21 AM