"Hi Paul,
I finally purchased dad's old bike this weekend that I previously mentioned. It is the black bike you mentioned with the Frosted Pearl. The bike went through several owners over the years until it was bought and stored in 1969. It stayed in storage until this past Saturday when I purchased it.

It has drilled Vincent front forks that have been modified to be rigid. Unfortunately, being a show bike, they rushed it and did not put a top bearing in the forks, which is the first thing that I will be addressing to correct. It also has a Vincent front hub and front rim.

It has a polished head and cases, chromed 376 carbs with custom manifolds, webco oil tank that's never had a drop of oil in it and a ton of other cool modifications.

Unfortunately, the candy paint is badly faded and cracking in several places. I think the bike deserves a fresh paint job and some fresh chrome in a few places.

I would love to hear people's opinion on this bike. I have no plans to modify it other than the possible repaint and some re-chroming as I mentioned. I'll send you some more pictures as I progress." 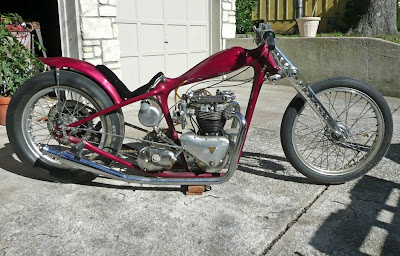 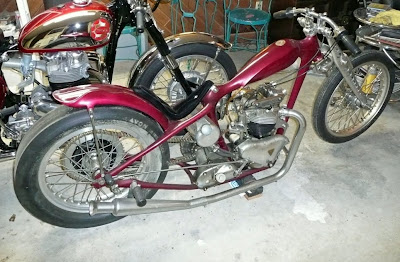 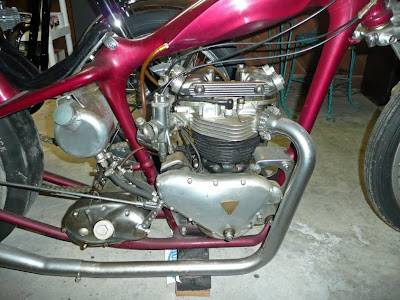 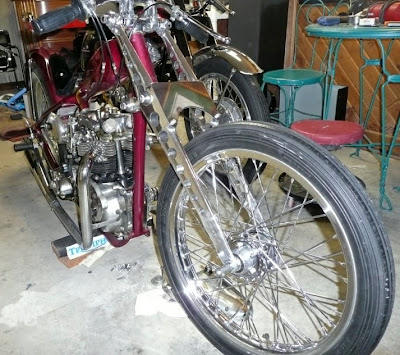 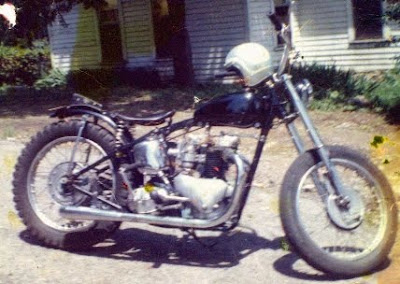 This has got to be one of the coolest finds I've ever seen. The bike in its 1950's form is a lovely example of a stripped down rigid Triumph built for speed work. It had all the right stuff and was really perfect just the way Dave's Dad had it. But for WOW factor the late 1960's build can't be touched. The later version is more Show than Go, but that was obviously the point. With styling touches of the Glittercycle / Mega Cycle laid on top of pure bad ass Triumph Drag Bike. I love the molding and overall frame & gas tank style. The frame looks to be stretched about 3" in the rear and dropped about the same amount. The overly raked rigid Vincent fork reminds me of Mike Vills show Triumph from the same period that used a extended girder pushed way out to keep the bike level. Negative trail is not good for speed work, but great for show points! Just the right amount of Webco and Bates bits, with what looks like excellent condition rubber all the way round. A gentle resto if you must to get it back to show winning condition and I'm thinking Grand National Roadster Show! What do you guys think???
Posted by Show and Go Cycle Shop at 11:31 AM