This is the perfect ending to one of the best survivor stories I've heard. The bike is completely restored to its original form from the mid-1960's, tuned to ride, back on the street and ridden to shows. Cheers to Scott Bemis for taking care of this old show & go cycle the way it is should to be done. 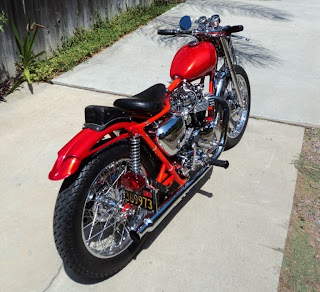 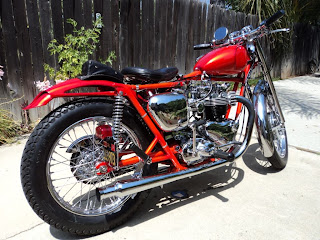 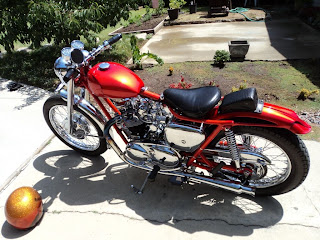 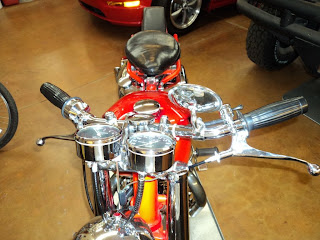 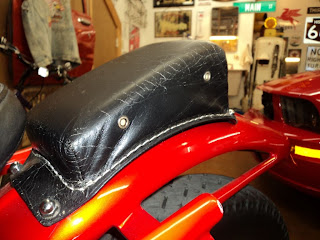 Found your blog on your website about the Zumbrunnen 61 trophy Sunsetter. Your article about the bike couldn't be more right. I am a purest at heart so preserving history is the best thing to do especially when there is so much history at stake. Don Built this bike in 1965, he and my buddy Alan Langdon were friends in the 60’s running up and down Valley blvd in San Gabriel, CA. Alan had a t-bucket that he would run against Don’s 13-1 compression AJ Lewis built drag bike. It was said back in the day it would wheelie in every gear and I believe it. Alan was always in love with that bike and he told Don back in the day if he sold it that Alan wanted to be first in line to buy it. Fast forward to 1992 Don finally decided to give it up. It had a little over 3000 miles on it since the build. It had been hiding under the blankets in his garage since the early 70’s.

Alan had always talked about this bike but I had no idea what it was all about. Alan rode HD’s at the time but he always loved that Trumpet. Alan took possession of it sometime in 1992 for who knows how much. It had been sitting for over 20 years. He went through the top end installed stainless valves lowered the compression so you could ride it with today’s gas. Don had everything white show chrome including the carbs, left and right amal’s. AJ Lewis did all the engine work in the early days, he took a Trophy head and port aligned the intakes, then added the second amal, it’s truly a masterpiece. I have all the receipts for the work that they did, I am truly blessed to be the curator of this piece of history. All the chrome on this bike is from 1965 it’s amazing! Alan was a gifted painter and a perfectionist. The tank was in bad shape so he stripped the outside and coated the inside and repainted it with the original formulas that Don provided. Tangerine Orange over White Pearl. He also painted the rear fender. Alan suffered from a bad back from his fireman days and was very uncomfortable riding it with the drag bars. Alan installed the mini apes so he could ride it without pain. He also left the seat pillion off to show his paint job. This bike was Alan’s prize possession. He cleaned it then painted what needed to painted and left it unmolested, he too was a purest and also a Virgo. Unfortunately Alan took sick with cancer and it took his life in 2003. He was a good man loved riding bikes and seeing the people.

Fast forward to 2008. Cookie, Alan’s widow and I became good friends, I understand why Alan married her she is a great gal. She rides her own HD, she is very outgoing and a lot of fun to be around. One day she sent me an email from the Sunsetter telling me how lonely she is and needs to be appreciated and ridden. I was instantly compelled just the way Alan was, only a little reluctant because I did not know her history as well as he did. Cookie new in her heart that I would respect and take care of her the way Alan and Don did. Cookie showed the bike a few times and had a fond respect for the history of that old 61 but she was not comfortable riding it and she knew she needed to be ridden.

Cookie and I struck a deal and I took fond position of the Sunsetter. She is a cantankerous little machine. I cleaned the carbs while still on the bike, cleaned the tank and relined it again, drained and replaced all the fluids, put new Avon’s on it but kept the original Dunlop gold and ribbed tires in my shop. Did not want them to come apart since they were over 40 years old. I soon made friends with Keith Moore of Moore Cycles, RIP Keith, he welcomed me into the brotherhood of classic Triumph bikes. I bought my first set of Whitworth wrenches and sockets from him along with new tires and cables and came with it was some advice. What a great person Keith was and I am lucky to have met him. I soon found out that the Sunsetter does not like the heat. Don had the cases chromed and it holds heat like no other. I only ride this bike in 75 or below weather. 60’s is perfect.

That same year I contacted The Horse Magazine to show them the bike. They loved it and made a date to shoot it. I gave them all the history including the Floyd Clymer Magazine article, they worked hard to get the rights to republish the article but went in another direction with their story. The actual history of this bike did not make the magazine. I was not disappointed at the time because the bike was not restored to its original glory.

During the magazine process I contacted Don Zumbrunnen, yes the man that built this machine. He lives in San Gabriel at 74 years old. He gave me a lot of history about the bike and we have become good friends. I tell him I get a big smile on my face thinking of him and Alan while I am motoring down the road. This bike is made to be ridden and ride it Is what I do, I know I am a lucky man to get to take her down the highway when the weather is cool, wrench and ride. In 2011 I took the bike and Don to the Born Free 3 show at Irvine lake. There was actually a guy from Oregon that came up to me and asked if that was the bike that the casket fitter built, he had seen it in The Horse Magazine. I said yes it is and he is sitting over there at that picnic table guarding that bottle of Jack. Do you want to meet him? After all that is why I made sure to invite him to the show, this show is about bike builders and their dreams. I am a curator of this fine piece of history that has been bestowed upon on me. It is my desire to make sure the story gets passed to the next generation after I am gone. This is a responsibility that I embrace.

This past year I obtained the drag bars, cables and seat pillion. Lucky for me Alan was a Virgo just like me and he never threw anything away that may have a purpose in the future. These items were essential for the ultimate restoration. I had the seat re-stuffed with new foam and hand stitched book binder placed on the bottom by the master Lynn Barnett at Thornton Auto Upholstery. (old school) I could have bought 2 new seats for what I paid him to do this fabulous job including the leather conditioning. But you just can’t buy Bates anymore. I installed the drag bars and cables and now it is complete. It rides like a dream and looks like it did when Don created it.

This past weekend I rode the Sunsetter back to Cookie’s house for a visit. The bike was in its old neighborhood from which it was created. I can’t help but think what it was like for Don and Alan to ride around the same streets some 50 years ago. I striped down Rosemead Blvd like I owned it! The Norton Owners Club of California is having a Run for the Roses ride on December 31. They meet in Pasadena then ride the San Gabriel Mountains, I am going to take the 61 and ride the Rose Parade route with her and show her off to all the Britts.

Scott Bemis
Posted by Show and Go Cycle Shop at 10:44 AM 1 comment: 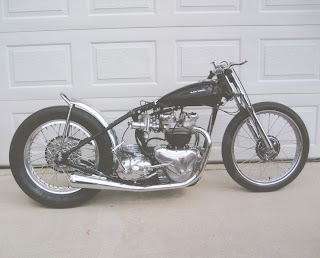 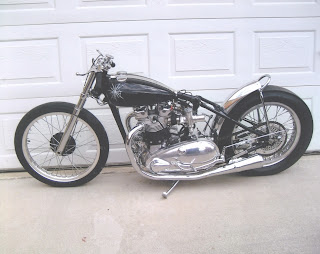 This 650cc drag bike, a.k.a. "The Black Widow", was originally built for and by the Lockhart Bros. at Bud Hare’s shop in Westminster, California, according to Barry Severs of Bud Hare’s. The engine and transmission have been gone through at British Parts in Whittier, California. It is equipped with Jomo heads, cams, twin GP carburetors, custom gas and oil tanks, Borrani wheels with M&H race slick, plus a lot more. Was raced at the Santa Ana Drags during the 1950s. After seeing it raced at Santa Ana the seller came across it again in 1994 and purchased the bike. He then restored to original condition.

Going up for bid at MidAmerica Auctions in January at the Las Vegas Antique Motorcycle Auction.
Posted by Show and Go Cycle Shop at 9:42 AM 1 comment: