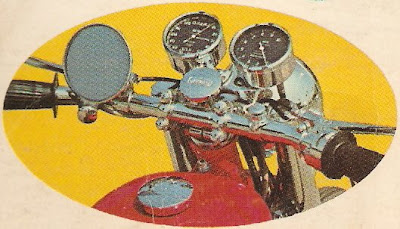 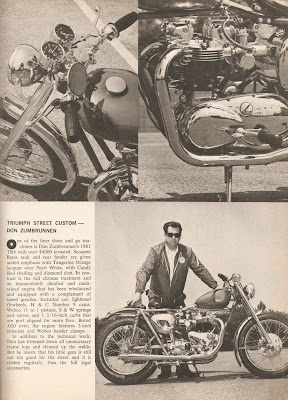 This month's #89 July 2009 issue of The Horse magazine has a feature on Don Zumbrunnen's beautiful custom TR6 originally customized in the early 1960's. The bike is still in amazing original condition or possibly recently restored with the only change being some buckhorn handlebars that I would swap back to the original drag type shown in this 1967 Motorcycle Sport Book feature. This is the type of bike that could have easily fallen into the hands of a "Triumph Bobber" builder and subjected to the bolt on hardtail, no paint or flat black treatment, little or no rear fender etc. etc. Surviving custom bikes like this one need to be preserved and credit goes to the current owner for taking care of it. The neat thing about the Horse article is that they run pictures of an original Cycle magazine feature on the bike from 1965 as well as the modern photos. The angles chosen for the modern shoot do not do the bike justice in my opinion though and I would have liked to hear more about the bikes history over the past 40 years. From the profile shot above you can appreciate how the kicked back front fender mounting with flared front matches so well with the curved side mount headlight bracket. I have other complaints about the feature I could whine about but give it a read yourself and let's hear what you think.
If you find an original custom bike from decades past think hard and long before you put wrench and hacksaw to it! Of course there were many custom choppers built back in the day that are begging to be put out of their misery and rebuilt into something better but just because the style doesn't suit you does not mean It's a good idea to destroy a bike with history. I believe that nicely done surviving customs will pull the same prices as unrestored stock bikes some day soon. Send pictures to me and I'll trade you bolt on hardtail's for original custom swing arm bikes any day!
Posted by Show and Go Cycle Shop at 11:16 AM