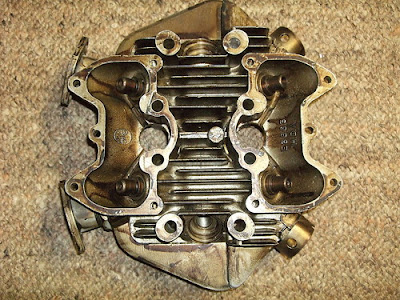 So I made a quick trip over to the Jackass Journal recently, as I do a few times per year to check the few things worth seeing that might have popped up, and found a little discussion on 8-bolt pre-unit heads that are made from the post 1962 9-bolt casting. I was feeling generous and decided I would chime in, only to find out that I had been "Banned for Life" from a previous post made many moons ago that had rubbed the now deceased Jackass in cheif the wrong way. I wasn't even trying, but take great pleasure in the banned for life status now.

Anyhoo, before you guys scour your partsbooks and bug the old timers that have now forgotton more than most bobber jockey's will ever know, let's accept that sometimes the most obvious answer can expain sufficeintly, without a need to over think it.

The cylinder head above is listed on ebay now, and I have to agree with the jj poster that said for the price they're trying to get for it, a couple more 15 cent pictures would have been nice. I already knew that Triumph had made replacement heads for the 650 pre-units from the new 1963 model head casting, but the above mentioned listing was news to me that late model casting replacement heads were also made for the pre-unit 500's. Being that the pre-unit 500 models had not been made for about 5 years at that point it's pretty cool that Triumph offered these for owners of those used bikes. These 8-bolt heads with the 9-bolt casting were sold as replacement parts needed for repair or upgrade to dual or single carb arrangements and would have been ordered through your local parts dealer. 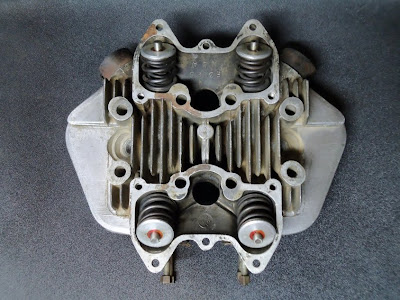 Here's one from my stash for a 650 engine with Webco collars/keepers. The date casting looks like '64. When I owned the original cylinder head from the dragbike Kepaloa, it had of these 9-bolt casting heads as well. As the story goes, when Al Brown wanted to convert his 1957 street/custom TR6 to full blown drag racer, he bought one of these replacement heads new and had the works done to it. I believe these heads were made available at least into the mid 1960's 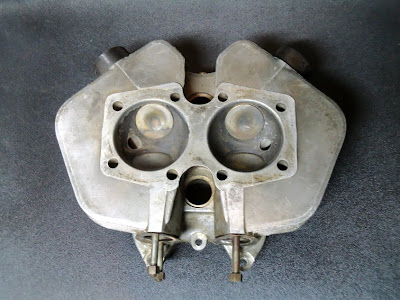 My opinion is that these heads are more desireable than the originals since they must be stronger, and for anything but the earliest of period correct builds, will be period correct too. The two of theses I've had did not have cracks in the combustion chambers as almost all of the original aluminum 8-bolt 650 heads do. 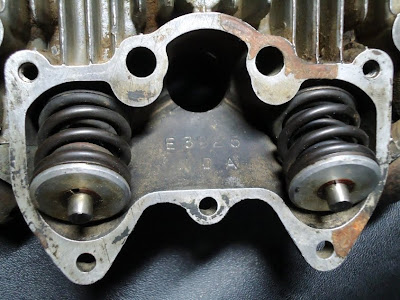 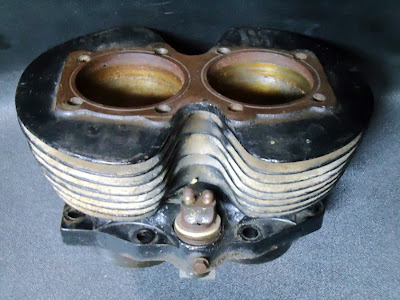 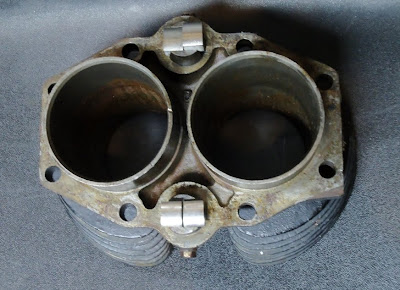 Cylinder heads weren't the only late model casting part made for pre-unit engines. Here we have a std. bore 8-bolt cylinder that has the 9-bolt casting with the enlarged area for the tappet oiling junction that was introduced in 1966. It was on a pre-unit engine that had unstamped cases, another part made available through the 1960's, leading me to think that the builder had bought the cases and cylinder new in the mid '60s for a rebuild.
Posted by Show and Go Cycle Shop at 9:22 AM