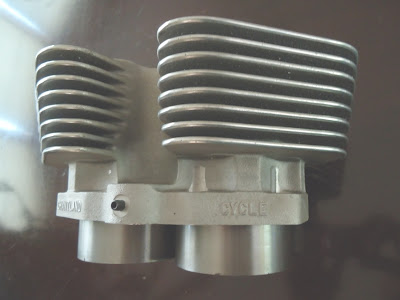 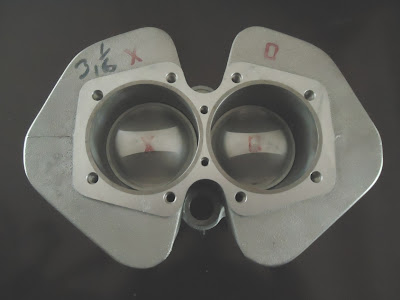 About five or six years ago I bought a NOS Chantland big bore kit from a big time museum/collector seller on ebay. I had been doing my research on the history and specifications of the various period big bore cylinder kits for Triumph engines and recognised this one as something special. The first cylinder the seller sent me looked good at first glance, but upon closer inspection I found that the whole thing had been machined off center, making it a really cool looking and expensive paper weight. Long story short, after some arguing back and forth, I managed to get this one in exchange by coughing up some more money and returning the bad one. He only had the two and I now had the only good one. At that point I had about $900 into it. What we have here is an extremely rare Chantland 800 kit. I had seen ads for them in the AMDRA motorcycle drag racing rule books from the early 1970's, but when I talked to Sid, the son of Bob Chantland, who has an ongoing interest in his Dad's work and vintage Triumphs, he had never even heard of the 800 kit, deepening the mystery. 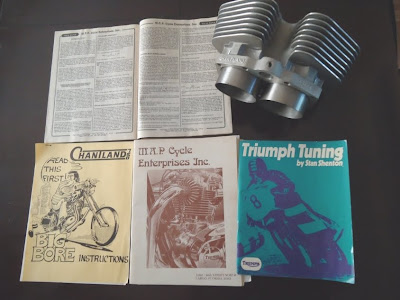 Sid Chantland gave me the original Chantland instructions which are a treasure trove of good advice written by Bob Chantland and are helpful for any big bore cylinder installation. These original instructions that came with all the 750 kits make no mention of the 800 kit and its anomalies. The 800 cylinder has a 3.060" standard bore that allows a oversizes up to 3.100" and some interesting details of the Chantland 800 kit are that the 3/8" headbolt studs are turned down to 5/16" at the cylinder to allow for sleeve clearance and a ten bolt arrangement that differs at the center two bolts from the Triumph late model pattern and the Routt 10-bolt pattern as well. My problems with the kit as it was were that the special studs were not concentric or straight, the head gasket that came with it was crap, and the pistons were forged 10.5 to 1 compression ratio. Forged pistons for the big bore kits from this era were designed for racing and not street use. 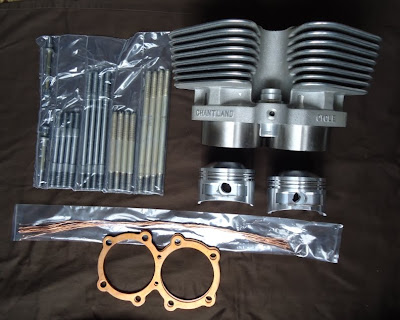 Enter Marino, founder of MAP Cycle in Florida. I've been a follower of MAP products for about the past 20 years, using many of their parts over the years, but never having a chance to build a big bore engine based heavily on MAP parts, until now. After some phone conversations and a lot of emails back and forth with Marino this is what we came up with. Ten specially made studs to replace the originals (with four more coming so I can use a 1971-72 cylinder head), three tailor made head gaskets to fit the unique bolt pattern and the large bore, wire to fit the custom groove he machined around the bore holes, specially fit alloy tappet blocks, and custom made 8.5 to 1 forged 3.070" big bore pistons. MAP also honed the cylinders to fit the new pistons using a torque plate. 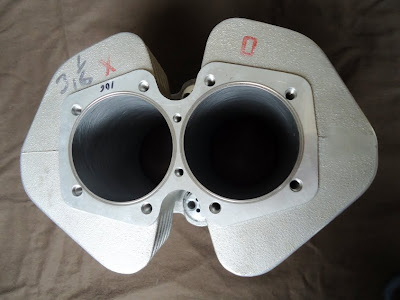 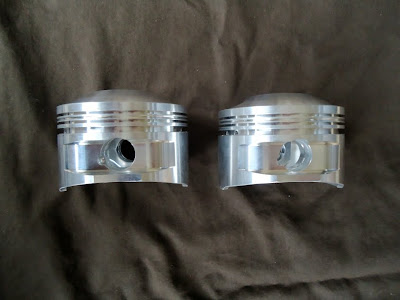 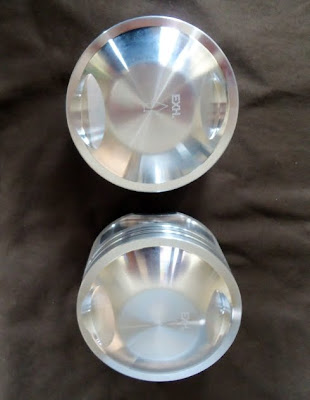 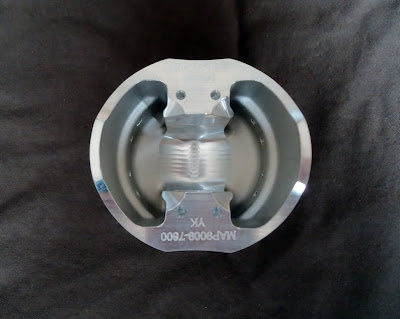 When I told Marino that I wanted to build a engine with the emphasis on torque and we were talking what kind of pistons to use instead of the 10.5 to 1's that came with it, he came up with the idea to use 8.5 to 1's. After thinking about it for a little bit I really started to like the idea since this top end is going on a 1961 TR6C that is going to be based on period SoCal cross country desert sled parts. When I looked into the stock specs for the TR6 models during the Bud Ekins era I found that the TR6 engines of the time were all running 8.5 to 1 pistons. Since the overall design of the 800 cylinder has everything pushed out to the max, with even the cylinder sleeves breaking out of the casting around the base studs (look closely at the pics, this did bother Marino) I decided it best to go this way. The benefits of using the Chantland 800 cylinder besides super neat looks, will be lighter weight than stock, better cooling, and a big bump in the torque department and additional HP. 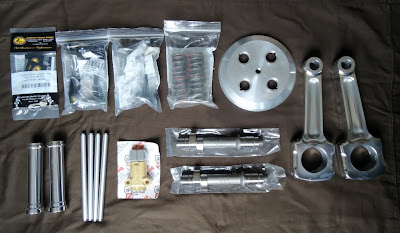 Megacycle 510-05 cams for low to mid range power and a Morgo oil pump to keep the pressure up. Now to get a crankshaft balanced to 85% with these parts.

For the best high performance Triumph parts made from knowledge gained through experience by people who live modified Triumph's you need to go to MAP.
Posted by Show and Go Cycle Shop at 3:29 PM