There are people in the custom motorcycle world today who would talk trash about the effort to build "period correct" custom motorcycles. They tend to be the highly praised on the Internet type made into heroes for doubtful reasons and the type of guys that wear their T-shirts, the sawsall & black spray paint builder, and the sky's no limit master fabricators. I have no respect for those people. My focus (when I can focus) is about carrying on the tradition of the early custom bike scene in a faithful way while working on the effort to perfect those original street/strip/show & race bike styles using the correct period parts. IF a bike is to be truly considered period correct, a guy that knows his stuff should be able to give it the once over and not be able to tell if it is a newly restored period build or just built from scratch.
Case in point, the spool front wheel hub. The custom bike scene has come a long way in the past 20 years or so. Traditional customs were almost completely lost at one point, but now things have come back full circle where a motorcycle show like the recent Born Free 2 was made up almost entirely of newly built period styled masterpieces. It is a beautiful thing, but one detail I've noticed to be pretty common is the use of tiny alloy spool hubs with fins, ribs and such used on bikes that are supposed to be styled in a pre 1970's fashion. Sorry to burst anyone's bubble, but a 1950's era bob job or a early 1960's era chop job, shouldn't be running one of these little alloy spools. This post contains some of what I know about pre 1970's spool wheel hubs. Comments and additional info welcomed and encouraged. 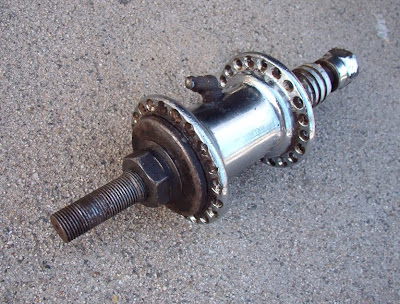 The motivation for this post came from this little steel hub that I am providing to the current owner of the newly discovered "Little One" Triumph Pre-unit Showbike that was originally built in the 1960's. Stay tuned for a story on that in the next few days. From the pictures I have of the Little One, I believe this to be the same hub as used on the original build. This one has a custom made axle that I think may have been designed to go with two right side Triumph pre-unit fork sliders. Very cool, and I hate to part with it, but obviously it's going towards a worthy cause. Ive only seen this type of hub a handful of times and do not know the maker or story behind them. 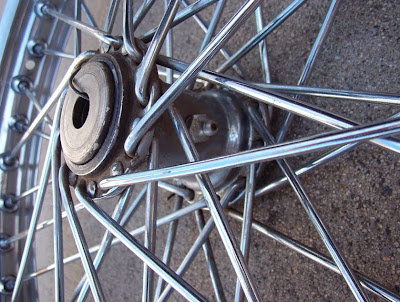 Here is the exact same type of hub with a different style of grease zirk that came with my early 1960's Triumph Pre-unit Dragbike project that was originally featured in the August 1961 Issue of Hot Rod Magazine. As you can see these hubs are distinctive in that they have a steel face plate that covers the bearings intended as a grease retainer for early open bearings. This detail in itself would date these as a early period hub. The one above is sized precisely for a early 1950's Triumph slip through axle. 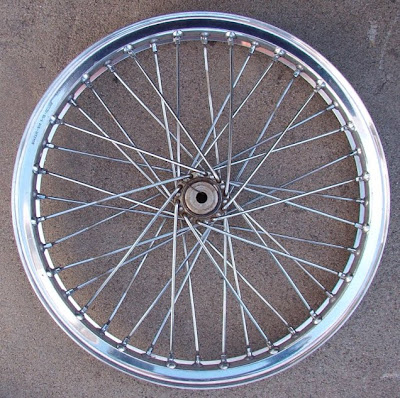 I'm guessing these hubs are American made, just because I'm 99% sure they are not British. If anyone knows the real dirt on them please illuminate. 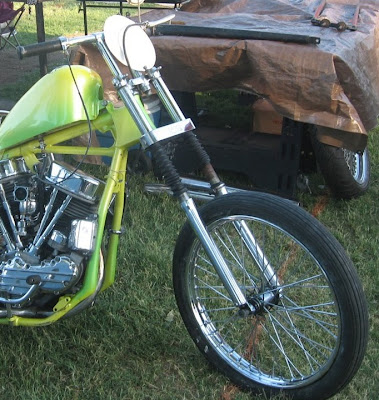 I could have spent a bunch of time scouring the saved picture files for more examples of the early small steel hub, but by coincidence this pic popped up on Max's blog last week. Most easily identified by that round steel grease retainer. The bike itself is a super bitchin' late 1960's chopper style Panhead. The forks are 1960's era Sportster. Check his blog for full picture. Of course the other pre 1970's type of spool hub that was probably used more than any other would be the stripped down HD Star Hub. Being a Triumph guy, I don't have any of those! 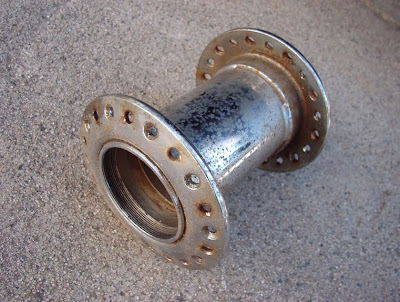 This Triumph factory spool hub is probably my favorite type. Dating back to sometime in the early 1950's they were used on factory models such as the 1955 T100R, the hubs were also sold through the JoMo Accessory catalogs and dealerships for flat track racing. They found their way onto many custom bikes back then, including Harley's. Somewhere I have a late 1960's article from Cycle Guide magazine that Tom McMullen did on how to buy one of these from the Triumph dealer and set it up on your Harley chop. I like them because they have a clean Triumph look to them and can be used with the early slide through or clamp-on type axles. As far as I know they were available for a period of almost 20 years. 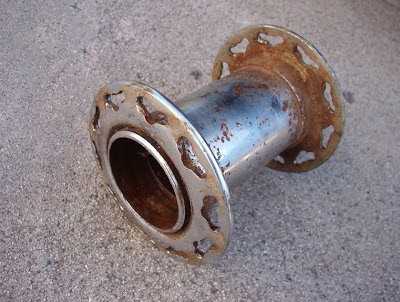 Here is another Triumph example, although I do not think it is factory made. I'm guessing it was made from the parts from two rear wheel hubs. It is brazed together and the work is so good that it does look factory made. The clamp-on type axle arrangement that came with it is not designed as well as the factory type hub previously mentioned, but I love the looks of it and it will make a great Showbike hub. 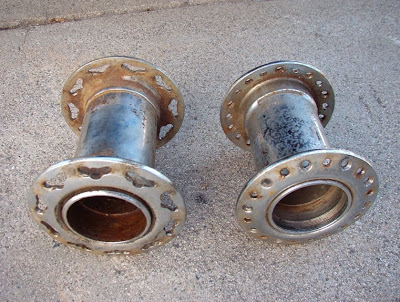 Comparison pic. The known factory version on the right has a threaded race for the bearing retainer disc, but the home brew? job on the left does not. The hub on the left is just slightly wider too. 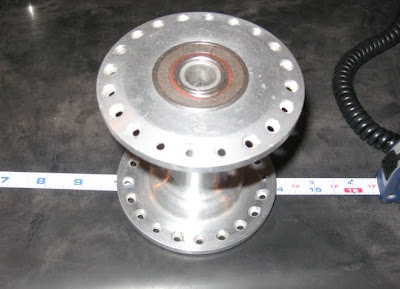 The Webco spool wheel hub. Beautifully spun from from a large billet of alloy that would have been extremely high quality for the time which I believe to be originally offered from 1955-56. 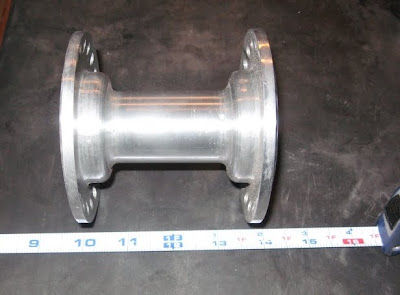 I would really like to own one of these if anyone has a nice example for sale or trade. 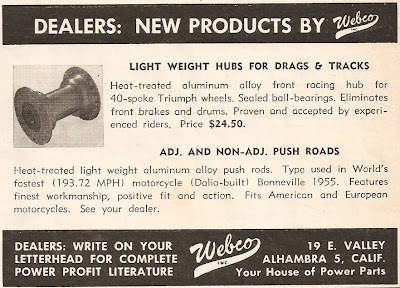