I'm very pleased to bring you an up to date report from David Edwards of his Lost Von Dutch custom Triumph. Originally covered on the Cycle World website HERE, David has been kind enough to write up the details of the progress that has been made since the last Cycle World post and provide them to the Show & Go faithful here.

The bike as found. Things looked even worse on the inside. 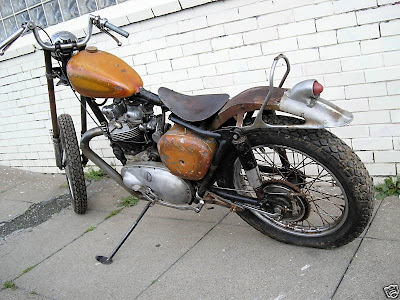 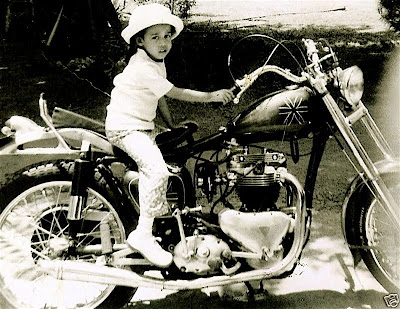 The plan: Take it back via restoration to this earlier form. The story in David's words:

"Work on the "Lost Von Dutch" continues, albeit at a slower pace, funded by eBay sales––who knew some cat in Austria would gladly fork over $500 for an oily old BSA A10 cylinder head? Motor is complete thanks to Bill Getty at JRC Engineering, who left as many Dutch'd parts as possible and replaced with new or used only as a last resort. Even kept the corroded timing cover with the owner's name, "Johnny," hand-engraved by Von Dutch. Polished up nicely and the after-effects of the corrosion are part of the bike's story. Motor and gearbox had seen some heavy use, more proof that the '57 T110 had been desert-raced before Von Dutch gussied it up for sale at Bud Ekins' Triumph shop.

As you may know, Bill Getty is in the business of selling Britbike parts to shops; he doesn't build engines for customers. I was honored that he spun wrenches on the "LVD" as a personal favor. JRC Engineering also had most of the chassis parts we needed.

Speaking of which, we have a roller! Denny Berg has been doing restoration work worthy of the Smithsonian. As you'll remember, the bike was originally built as a bob-job by Von Dutch in the late '50s/early '60s. Los Angeles sportscaster Gil Stratton owned it for awhile, traded it back to Ekins, after which young L.A. County lifeguard Johnny Suggs bought it. Suggs was a fan/friend of Von Dutch and would sometimes fetch him "breakfast," a fifth of vodka and a six-pack of beer! In 1968, to celebrate Suggs' safe return from a tour of duty in Vietnam, Dutch treated the bike to a new paint job, a brilliant yellow/orange with gold pinstripes. A couple of years later, at the height of the Easy Rider craze, Dutch chopped the Triumph for Suggs.

Perhaps because now it wasn't very rideable––or maybe it had something to do with Suggs' new career in federal law enforcement––the Triumph was parked sometime in the '70s. It remained outside baking in the Southern California sun, and at one point was half-buried in a mud slide after a particularly rainy spring. During the clean-up it was actually loaded onto a garbage skip. Much to Mrs. Suggs' dismay, John rescued the bike, but sold it a few years later to a car collector who soon thought better of restoring the rusty, muddy relic and put it on eBay, which is where I enter the picture. All mine for $3350 and the gas to get to Oakland to pick it up.

What looked bad in photos was worse in person. Without the Von Dutch provenance, it probably should have been in the city dump! Denny set about a restoration that kept as many "touched by Dutch" parts as was humanly possible, even when replacing with a like component would have been far easier and cheaper. He's welded up corroded parts and filed/sanded them back down. Painted the frame himself because he wanted a just-right finish. Modified the few replacement parts we've needed to exactly replicate the way they were customized. I've restored many a bike over the years but nothing has been as epic as bringing this one back from the dead––well, except for my Ford V8-60 powered Indian 4, but that's another (and ongoing) story...

Paint has been a sticking point. Originally, I wanted to restore the frame, engine and running gear but leave the Dutch paintwork as-found. But I ride my bikes and the original paint was so damaged and so fragile from its 40 years of outside exposure that riding wouldn't have been possible. Paint was flaking off in the wind as I hauled the Triumph home in my pickup! A second set of tinware was found (JRC for the oil tank and battery box, my friend Stan van Amburgh for the NOS Wassell peanut tank) and along with the originals was taken to Buck Wild Designs for a replica paint job. To call Buck a painter isn't quite accurate; the man is an artist who happens to work with motorcycles. He got right down to the molecular level with the original paint, channeled Von Dutch, and laid on an absolutely spectacular scheme, with fogging, pinstripes and a touch of pearl in the orange. This is what Dutch's handiwork looked like when new. And purists save yer hate mail, it's signed "Von Dutch '68 by Buck Wild '10" so we're not trying to fool anybody. At shows, we'll display the original bodywork alongside.

Still lots of work to do. The rusty rear fender, a Von Dutch original, swiss-cheesed and weld-repaired almost beyond redemption, will be a bitch to rehab but Denny will somehow pull it off. And we're still looking for the right mufflers, using your catalog research as our guide, thanks for that." 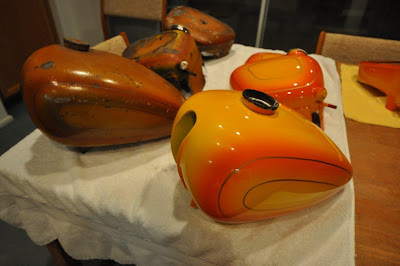 The original sheet metal next to the new. Von Dutch said that he preferred to work in solid materials such as metal & wood because they were more permanent and that paint was only temporary. When a bike is as beat up and neglected as this one I'm for the saving of original painted parts for display and new parts for the resto. The cool thing about doing it this way is that the bike can be ridden and used again when done without worry of further damaging of the painters original work, and the original body parts could be remounted for display, show or museum duty any time in the future. 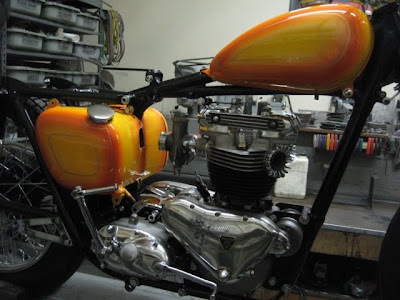 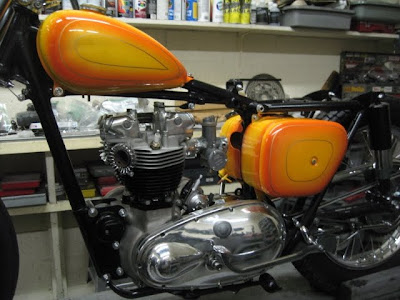 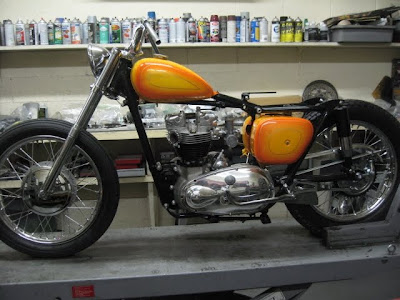 A Bates P-pad in any condition is needed, if you can help please let us know. It's gonna be neat to see that Von Dutch rear fender grab rail redone and back on this bike. I'm sending a Bates front fender to David today to help with the project. David now has a part-time gig with the Bonhams auction house as they expand their U.S. sales. He's helping with strategic planning plus vehicle/collection acquisition for auction. People with cars or bikes they would like to consign can reach him at his business e-mail, david.edwards.media@gmail.com.
Posted by Show and Go Cycle Shop at 8:39 AM