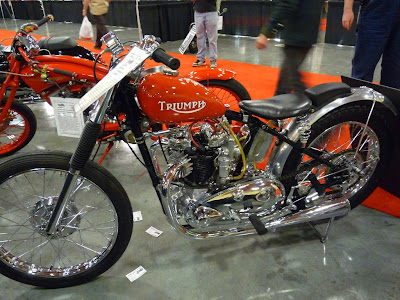 Click here to see the auction listing for the 500 and click here to see auction page listing for the 6T. The Mid America Auctions website says the 500 was bid up to $33,000 and the 6T up to 64,500! History?
What to say about a guy trying to sell a supposedly "restored" Triumph dragbike for $65,000? There are actually a trio of bikes involved here named "Pretty Boy" one, two and three. The first two were listed together at one of the recent motorcycle auctions for sale at $125,000 as a package deal or seperately at $65,000 each. Even if they were pristine unrestored originals that would be a stretch, but the story gets even more interesting. These are now being advertised as the actual machines that Bobby raced in 1953, BUT the first Pretty Boy build was originally touted as a accurate recreation when his website first popped up. I have seen the bike in person and although a pretty nice job it does have the look of a recreation. I have checked his website again and the main picture feed still lists Pretty Boy One as a recreation so why the auction info stating the bikes as Thee record setting motorcycles he raced? I guess you can say whatever you want to the auction house and have it listed as truth. The info on his website is thin and the "before" picture of one of the bikes shows it with a sprung hub?
Here is a quote pulled off the site where I found the picture above made by "The Vintagent" a well respected authority in the vintage motorcycle community.

"One of 8,000 'Bobby Sirkegian Replicas' made by BS himself, each being touted as THE bike he set his records on in '53. Not surprisingly, none sold - his reserve was $97k! Trying to sell two identical machines with the same catalog description / claim of racing provenance is perhaps a poor choice... "

Then there is this ad from the Oct. 1956 issue of CYCLE magazine. Sure he might have bought the bikes back at some point, but did he destretch the frames back to original? I think not. No info on the website to support that and just one more bit of information to dubunk his originality claims. Unrestored motorcycles have gained their proper standing as the most desireable, with restorations coming second and the value of "recreations" based on the rarity and value of the sum parts. Although some rare parts are used on this bike I could recreate "Pretty Boy" with parts in my garage now. You can not recreate history into a machine. If the guy was just showing the bikes at museums and touring the bike shows it wouldn't really be a big deal, but when he's trying to break sales records for this type of bike by attempting to fool the motorcycle community someone needs to set the record straight. I call bullshit. Comments invited from all parties.
Posted by Show and Go Cycle Shop at 7:49 AM