The San Jose California Clubman's meet this year was great. I've been going since 1994 and every year has been different. The featured Marque this year was Ariel and there was a lot of really nice examples to look at. Not much chopper stuff this year in the swap meet, but the Triumph Pre-Unit bits made up for it. The bike show was full and the turn out was really good. Loads of awesome bikes to see and only a couple crappy modern "bobbers" in the lot. I picked my favorite three bikes of the show to post here. The owners of these bikes all had great stories and were really fun to talk to. Thanks guys! 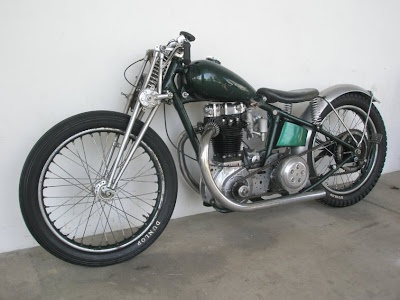 1938 Ariel Red Hunter 500 Drag Bike with a 1947 motor. This bike was built by Mort Kahn around 1949/50 and was part of the original drag race scene in Southern California. It was raced mostly in the early 50's until the Triumph Twins started to dominate. It was said that it would eat up BSA Gold Stars all day and never lost a race when piloted by Mort. 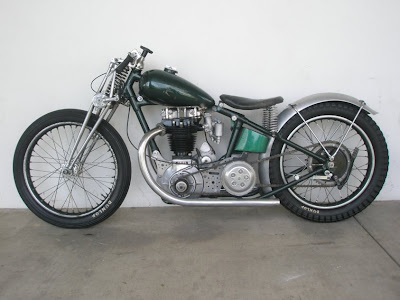 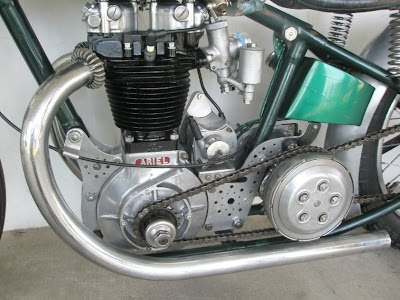 The 1947 Dual Port 500 motor has a Jerry Fairchild camshaft with roller followers and a 1 7/8" intake valve from a 1931 Cadillac! The carburetor is a AMAL TT with dual float bowls. 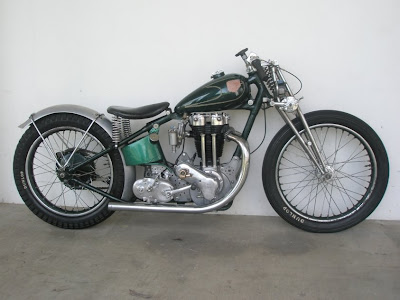 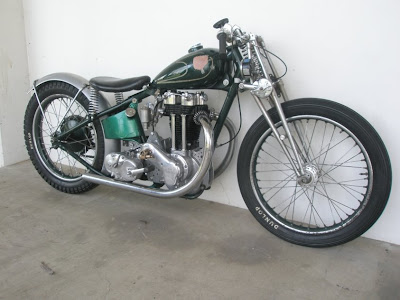 Mort gave the bike to his friend George Grant in 1975. The bike was a rust bucket at the time and George has cared for and carefully restored the bike to the condition it is in now. 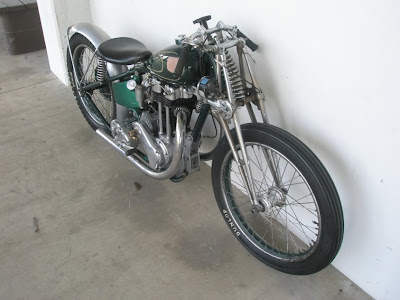 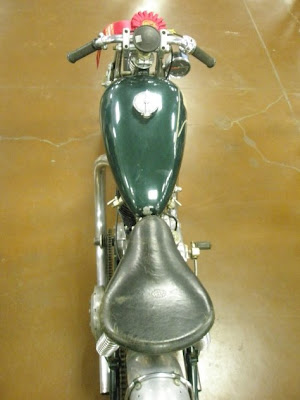 The gas tank is from a Mustang. George said they would buy them new and unpainted from the dealer. This tank has had a Triumph Competition cap added and has been galvanised on the inside because the bike was run on Alchohol. The bike originally had a alloy sheetmetal seat that laid flat against the frame and up the fender so that the rider would be fully tucked into the bike with the footpegs located near the rear axle. The Bates seat was put on by George and I think it fits the part and would make the bike very rideable set up like this. I want to ride it! 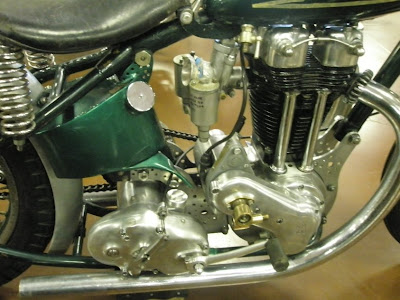 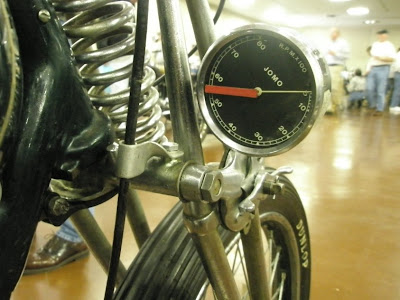 George actually worked at Johnson Motors during the late 40's and early 50's and has a wealth of information on the subject including the story on the JOMO tachometer! The story goes that during that era tachometers were unavailable and racers were asking for them so some Smiths chronometric speedometers were converted in the Johnson Motors shop and the custom made JOMO faces installed. They originally sold for $20 but since George worked at JoMo he could get them for $15. He bought a couple at the time and has one on his 1938 Red Hunter street bike too. Around 1952 the SMITHS company got wind of what they were doing and put a stop to it by supplying their own tachs making these clocks some very rare peices. 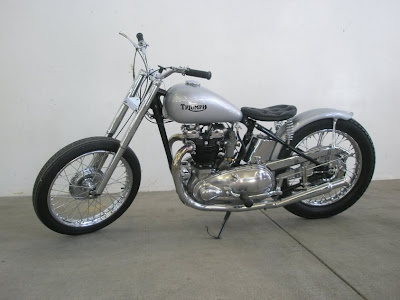 This rigid Thunderbird is owned by Bill Sauer. He bought the bike in the mid 1950's from the original owner. Bill customized the bike and did all the performance upgrades. He raced the bike on the track, street & strip! This is a true Show & Go machine. Bill is in his 70's and just recently retired from his Lineman job. The bike had been taken apart and had been a basket case since the 1980's. Bill fully restored it with new paint, powdercoat and some chrome. He has just recently registered it and will install lights soon as he plans on riding this sweet old Triumph again. 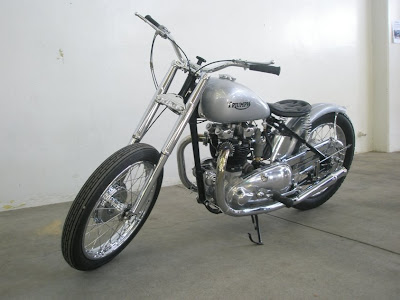 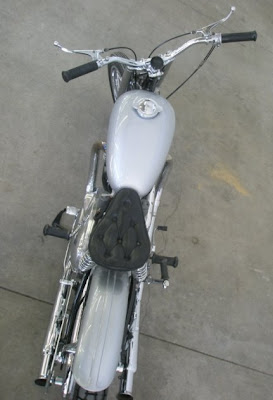 The gas tank is off a late 1950's CZ with a custom cap. The oil tank was made by Bill as well as the neat fender braces. He has the original side mounted license plate/tail light mount he made that matches the fender braces and will be putting it back on the bike. 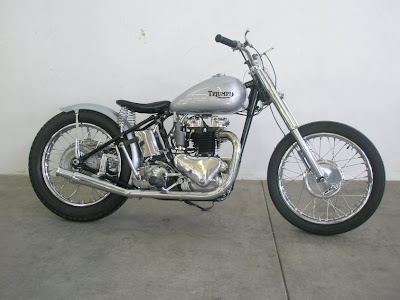 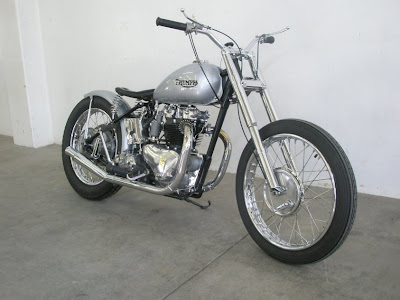 The head was modified by Bill with the use of welded on intake spigots and the carbs are a rare type of dual remote float AMALs that he had found on sale at a bike shop way back in the day. 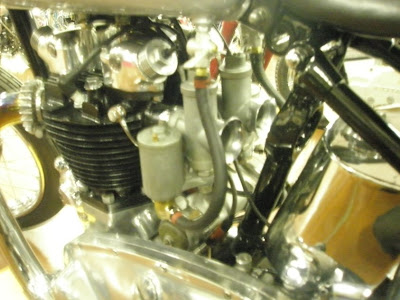 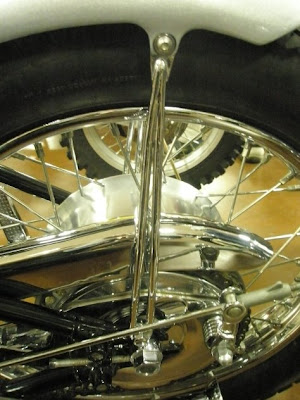 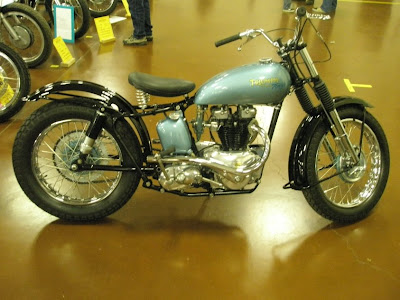 This 1950 Thunderbird was lovingly restored by Matt Ameln for his father Tony. Matt told me straight away that he is not a bike guy, but after his Dad became ill he decided to rebuild the old race bike that had sat untouched since Matt was a kid. Matt did a hell of nice job on this neat old T-Bird! He restored it to be exactly as it was when his father raced it. Most of the gas tank was bare metal but he found the Thunderbird Polychromatic Blue on the underside and had it matched up for the parts that needed it. Perfect! 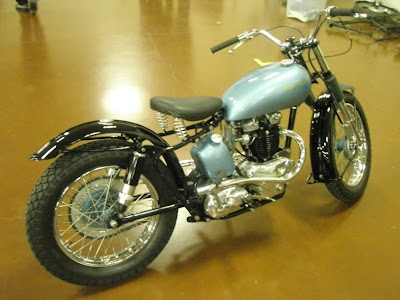 The bike was bought from Phil Cancilla as a stocker and modified by Clark Russer with a AJS rear frame section a TR5 gas tank and upswept exhaust pipes. The bike was raced by Tony in the 1950's in the San Jose area and kept by him all these years. 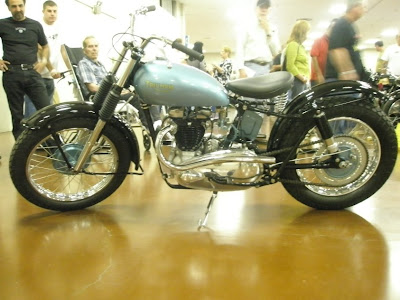 There were a variety of Swing arm conversions done to factory rigid frames in the early 1950's. This one was extremely well done. The frame is the Triumph GP rigid competition type with rearset footpeg lugs and the bottom frame section is cut and modified to mount to the rearset lugs. The quality of workmanship is top notch. I have a 1952 Martin Spring framed T-Bird myself in the works that will be very similar to this bike. The only thing Matt has left to do is restore and install the side mounted air cleaner and some neat trumpet shaped exhaust tips that are original to the build.
Posted by Show and Go Cycle Shop at 8:41 AM