Scott Thompson sends in this encouraging report from the Florida cross country crew.

As usual I continue to enjoy the hell outta the blog. Great stuff as always. A year or so ago I sent some pics of us beating a couple Triumphs to death off road, and I'm happy to report we continued to do so this year. In fact, its been a pretty good year for our woods tanks in AHRMA Cross Country. Max (Tr5t #M50 in the following pics) won classic expert and I (T100 #S50) won classic intermediate, while our other teammate (George Tr5t #G50) finished 3rd in classic int. I've included some pics from the last race, the ISDT Reunion Ride in Combs, AR, where we collectively got beat to death by a swarm of Hodakas.

First pic, the three of us on the line waiting for our start minute. Me in front, Max next, George on end. 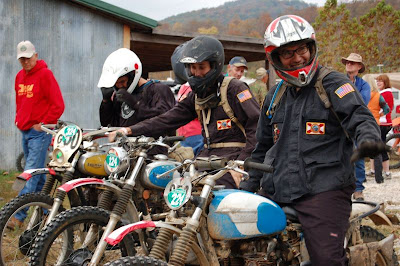 On the grass track at the end of day one 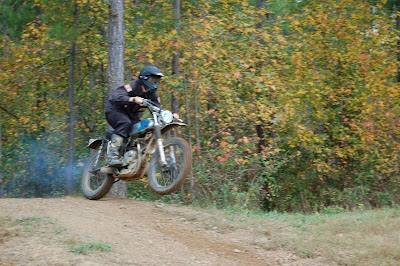 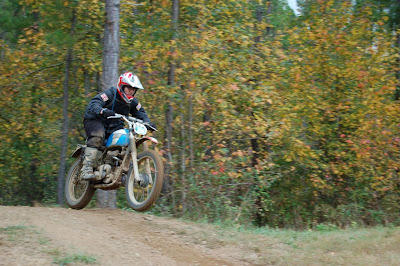 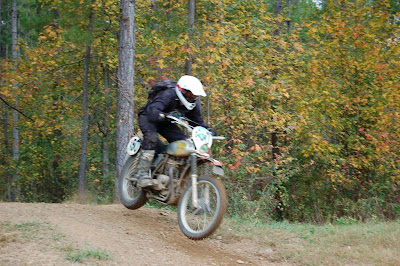 You can beat the ever living snot outta these 500 motors. Even after a couple seasons of hard racing I'm still amazed at the amount of abuse they can take and keep going. Earlier this season I had an oil pump failure while screwing around the friday before a two day race. I got it cleared on saturday, missing that day's racing, but it sounded horrid (I would describe it as sounding like sticking a dozen hammers in the dryer). I knew it was gonna need a teardown when I got it home so decided to get whatever points I could on sunday. I managed enough laps to win my class before it stopped, and I mean it just STOPPED operating. When I took it apart there was nothing left of the big ends (shells were extruded out between the rods and flywheels), timing side bush, and crankpins but it had just kept on going. I had torn down, parts tracked down and reassembled in a week an a half. It was together in the shop and started but not ridden by 5pm on thursday, loaded in the van at 6pm, we drove to West Virginia and raced the next day around noon and it won its class. Incredible engines, simply incredible.

Also, a while back you posted this pic on your site: 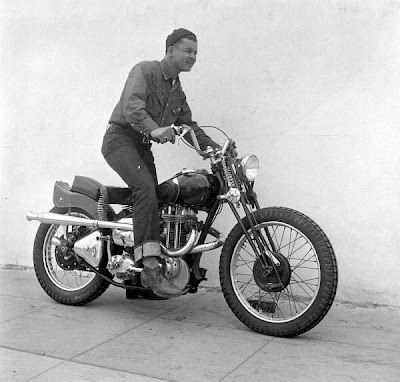 Along with a couple others I found around the same time: 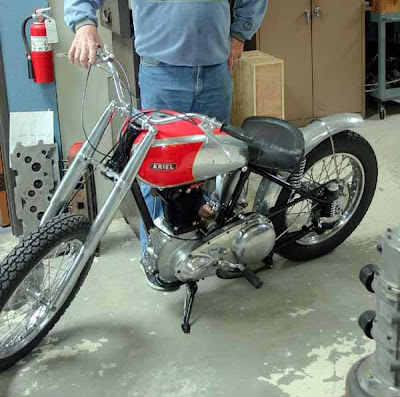 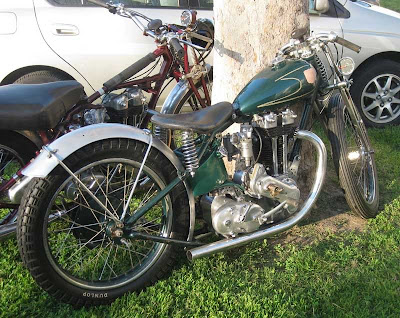 Which was perfect timing because I had just picked up this thing in a parts auction: 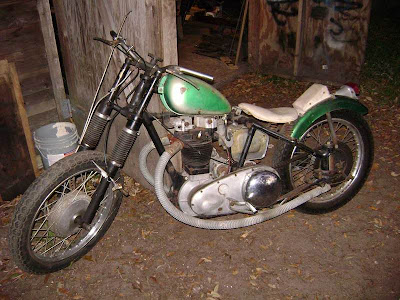 Which was a bit of a horror (in this pic I've already removed the Schwinn handlebars), but pretty interesting below the surface. There were to distinct layers to it, the last involving some honda parts, but the first was much much earlier, involving swapping out some of the Red Hunter parts for a good bit of work, and it was generally stripped pretty well down. Not sure who did all the work or for what purpose, but it was pretty neat stuff. So, thanks to the pic you posted and a couple other shots of what people had done to the weird batch of twin port Red Hunters that were sent to California immediately post war, I built mine like this: 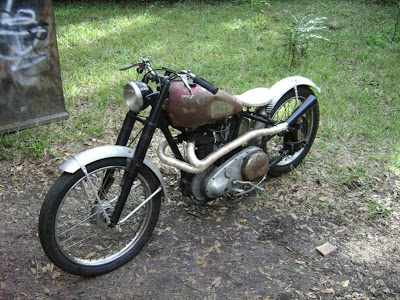 Which is a pretty fun pile. I'm not sure what it is exactly, but it runs great and I'm just enjoying it for the mongrel it is.
Posted by Show and Go Cycle Shop at 9:44 AM