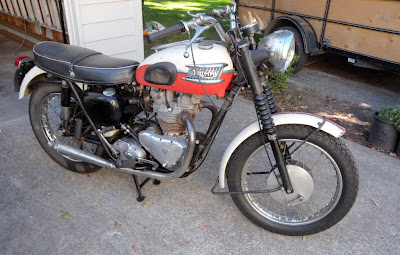 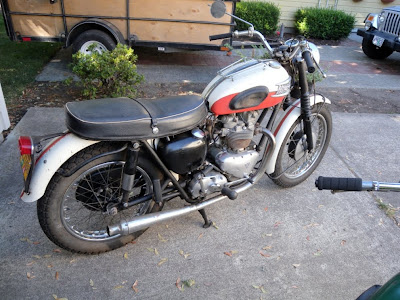 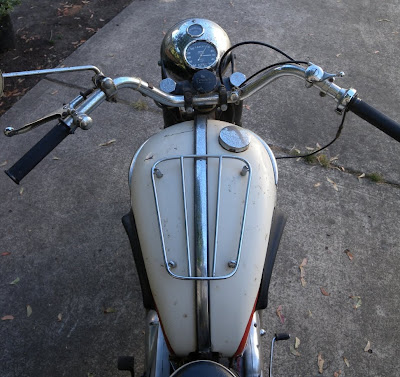 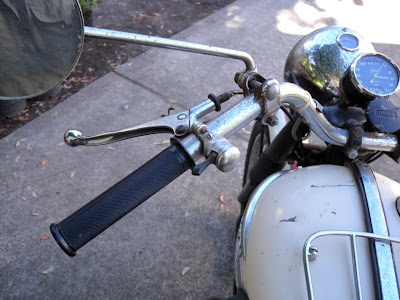 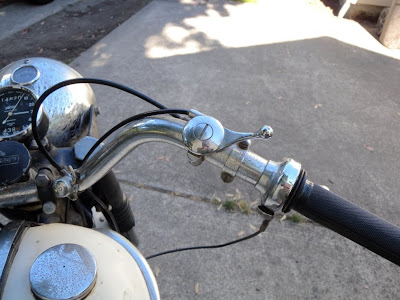 Hey Paul,
attached are some general pictures of the 1960 tr6 I picked up. What I now so far is:

1. All 3 owners knew each other. The bike has resided in the same county in Oregon since it was shipped to the US new in 1960
2. Only first owner rode it
3. Been stored and occasionally started for 31 years
4. Pipes are old street racing type pipes. I was told there were from the sixties and they were the thing to do. 1st owner was reportedly a road racing guy and not off road
5. Headlight is a GE sealed light so I will replace it
6. Break light red plastic lens doesn't say lucas
7. Magneto is dated 1960 , but this bike would have mostly come with manually advance.
8. 1st owner bent up both drivers foot pegs for corning reasons (this is according to the previous owner.)
9. Starts no problem!
10. Drives ok but sounds/feels like it needs a tune up
11. A restoration person in Portland by teh name of Dave Wedlake looked the bike over. He noted that these bikes could come configured differently from the factory. A or B and the bikes were not marked in this year. He noted to go to a business in England that can run an authenticity check of what how it was configured leaving the factory and where it got shipped to. I think I will do that.
12. I don't have any plans to strip and restore the bike since the paint is in resepctable condition.
13. I will mostly likely disassemble the bike and rebuild it to mechanically sound condition
14. teh worst cosmetic item is the headlight housing. there as an agressive rusting/deterioration pattern on it that is very distracting. I may look for a used one. A new one would stick out like a soar thumb with teh aged appearance of the bike.
15. I can send whatever detailed photos you are interested in, just drop me a line.