Turning back the pages... 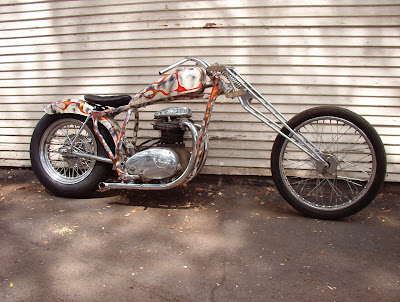 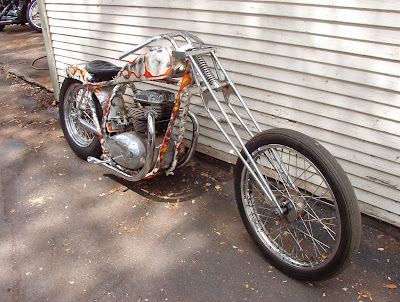 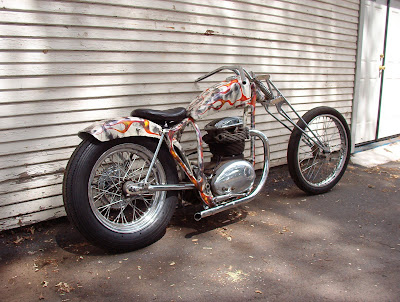 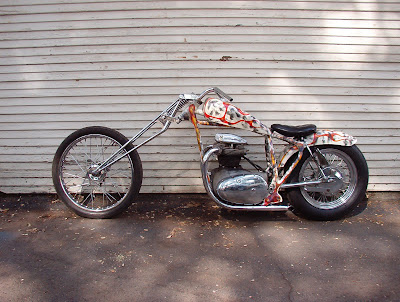 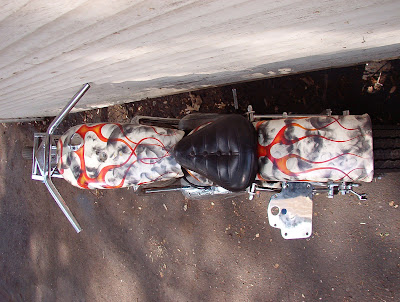 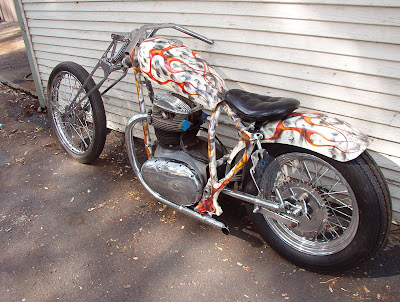 Jon Rispante found a pic of this bike on a page of mine located on a website that will remain unnamed and recognised it as a bike he had seen before having been rebuilt by a local to him custom bike builder. He emailed me to enquire and after seeing the pictures of it again I thought the back round story on this bike would fit into the blog mindset perfectly, so here's the tale.

About three or four? years ago I found this bike on ebay with no reserve and to my benefit it was located near-by my location of Central California in the Bay Area. The bike had been found in a San Jose shed where it had been stored for the last 40 or so years. It was one of those chopper projects that had been built by a local motorcycle shop to about 50% completion and then abandoned. Obviously "those" projects are far and few between. The description included some not so good pictures where I could see a swazi tailight that turned out to be NOS, a leather bates seat and other goodies that sweetened the deal substantially, but were not so obvious to whoever may have looked at the listing. From what I remember I paid about $1200 for it. Some of the really cool details of this bike were that the gas tank and matching fender were custom painted items from the Fiberglass Works in Santa Cruz CA. For comparison, I recently saw a similar custom painted set of tank and fender from this outfit go for $1200 on ebay. The acetylene and flame paint job on these pieces was close to flawless and the fender was undrilled! The frame had been painted way back when these items were new and done to match the fender/tank as close as possible. The paint on the frame was far from perfect and had some chips to the tubing here and there, but was still very acceptable in my opinion. I built an internal rear fender mounting brace that used three mounting points with the sides having chrome dome nuts strategically placed between seaweed flames. I also made rigid mounts for the seat and installed a set of stock exhaust pipes with turnout extensions. The early 1970's period NOS rear struts were added by myself as well as it had some jap shocks, and with no fender mounting arrangement, that was one of multiple problems for finishing this custom. The rear frame had been slightly modified and one of the struts needed to be bent to fit and mounts were added to it for the license plate bracket that came with the bike. The girder was a very rare NOS period chopper fork that as far as I could find out was a early Wayne Engineering piece. I took it apart and found that some fussing with it in the area of machine work would be necessary for it to fit the BSA frame properly and make me happy. The struts were the same small diameter tubing of the girder and I was real pleased with how the rear section turned out and matched the front so well, but I was having problems deciding on what to do for an oil tank due to lack of room. About the time I sold it I realized that the fender just needed to be bobbed in the front to solve that problem. I was building this bike in the early days of the DTMC shop to be my club bike, but came to the conclusion that the bike was more of a showbike than something I could thrash around the country on with the club. The cost of rebuilding the engine and figuring out all the details was going to be unrealistic for me at the time so I resold it on ebay. From what I remember I sold it for about $1200. Since I had made money on the other parts that came with it I had pretty much broke even considering the time I had in it. The guy I sold it to was nice enough, but not quite receptive to my advice and opinions about this particular piece of history. He could just not get past those chips in the paint on the frame. If he built it, it had to be "perfect". Despite my arguments the entire machine was repainted. From what I know of what he had to invest in it he was lucky to break even when he finished it and sold it on ebay for its third go around. To his credit he did finish it, and the other bikes he's built are of high build quality and style, but was losing that original artistry worth getting a "perfect" finish? What is more important, originality or no visible flaws? New paint almost NEVER reaches the level of the period paint when the period stuff is good. This is something many guys have a problem with when they find a old bike. Seeing how the bike turned out makes me wish I would have stuck with it and saved something that is now lost. Instead I built the Bloody Nose, because it was a lot more straight forward for me and I did not have to backwards engineer it like this cool old abandoned project that had been painted too soon. Confirmation of a commandment most custom bike builders know. Build first, then paint! 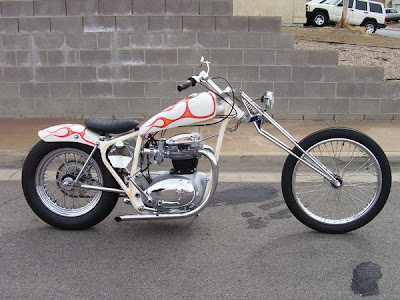 As far as what to do when you find a funky and cool as hell old painted piece from the day that may have moderate to heavy damage. Look no farther than Jon's "Assasin" rebuild!
Posted by Show and Go Cycle Shop at 5:16 PM