Hello, I'm sending these pics for you to post (or not)- they're a little grainy. They are a couple of bikes from my brother Jon's past. The Triumph, if I remember right, was a '57 T-bird engine in a '53 frame. He bought as a dirt bike in about '66 and sold it after getting out of the Army in '70. He did the paint- gold metal flake, made the sissy bar, added the tall bars, a squeeze bulb horn and all the other street necessities. Jon was 17 when he bought it, I was 10. I can't remember the year of the Royal Enfield, but I do remember it had the Indian logo cast into the timing side cover. This picture was taken in '73 and that is his brand new GMC van across the street. The motor seized a day or two after this picture, supposedly due to an incorrect bore. The shop he bought it from repaired it and he sold it as soon as he could. We thought those were a couple of bitchin' choppers back in the day. I still like the Triumph and today is the first time in at least 35 years I've seen either picture - Kevin Haggard 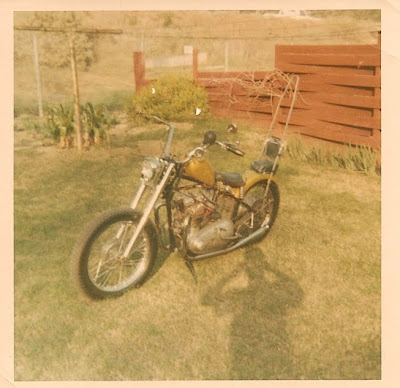 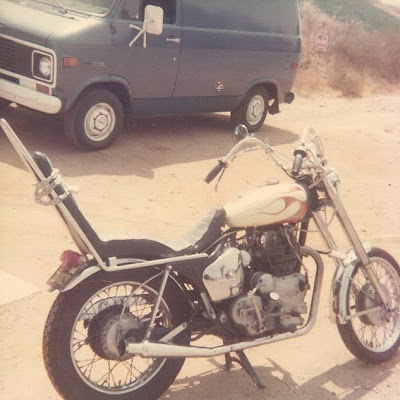 Totally bitchin'. Thanks Kevin!
Posted by Show and Go Cycle Shop at 5:11 PM